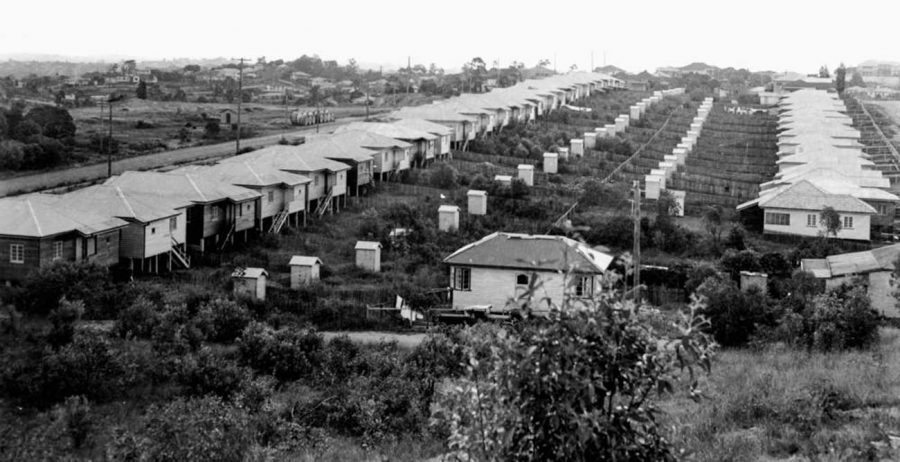 Growing up in the unsewered Melbourne suburbs of Bentleigh and later Moorabbin in the 1950s, I became accustomed to the delights of the outside lavatory – always known as the ‘dunny’. Our 1950s euphemism apparently derives from the ancient term ‘dunnekin’ which means an ‘earth closet’ or ‘cesspit’. Not happy with our perversion of ‘dunnekin’ into ‘dunny can’, we Australians also provide several other useful terms to describe this fine piece of Australian architecture – ie. the long-drop, the crapper or the bog.

The dunny was a humble wooden box with a door you shut by turning a wooden toggle, galvanised tin or cement sheet roofing, a wooden seat, a large tin can underneath and a hinged door at the back. A nail on which to hang the dunny paper, which consisted of squares of torn up newspaper, completed the accoutrement. A good dunny usually had something interesting to read in it as well.

I have a surprisingly clear memory of my younger brother, aged maybe seven, attempting the three foot leap between the garage and the dunny during a feisty game of ‘cowdies and indians’ and crashing straight through the dunny roof …but luckily for him, not into the brimming can below. The long wait anticipating father’s strap on his return home followed.

The Dunny Can man came around about once every two weeks to take away the full cans (what happened when the family reached the limit before Dunny Can Man day?) and leave us with an empty replacement which had been washed out with phenol. The piercing stink of phenol still evokes memories as it clung to your clothes leaving no-one inside in any doubt who had just used the can!

However the most vivid memory is of preparing yourself for the sprint back inside in the dark and the sterling job I did of pretending no boogie-man or slimy monster was chasing me as I fumbled with the back door of the house.

Our childhood house in Moorabbin was on an uneven intersection of unmade road just behind what would later become the St. Kilda footy ground. One day, after picking up our precious load and throwing it up on his truck, the Dunny Can Man drove off and around our pot holed corner and half a dozen full dunny cans spilled onto the roadway.

I like to think it was me, but it was probably some older kid who spoke up out of the crowd of kids gathered around this exciting event:

replied the Dunny Can Man without missing a beat!

Every Xmas the Dunny Can Man left a little poem for each and every customer. The corny doggerel went something like this……

A merry Xmas to you all, with plenty of good cheer
And may you have prosperity, throughout the coming year.And though the police keep order, there’s no more useful man
Than the chap who calls at daybreak and juggles with the can.

We leave your pan quite clean and try not to make a mess
We leave our verses every year and wish you all success.

The family would always leave him a long neck bottle of beer or three  ….you were too scared of the ramifications not to!!

Many years later my partner and I bought a run down rural property in Tassie which had no running water and only an outside dunny next to the chook house. Our chooks free ranged occasionally and woe betide anyone who left the dunny door open. It is hard to imagine a more pathetic or disturbing sight than a previously lovely australorp who has either slipped (or was overcome with the fumes), while perched on the dunny seat and drowned!

The humble dunny has inspired literature….. 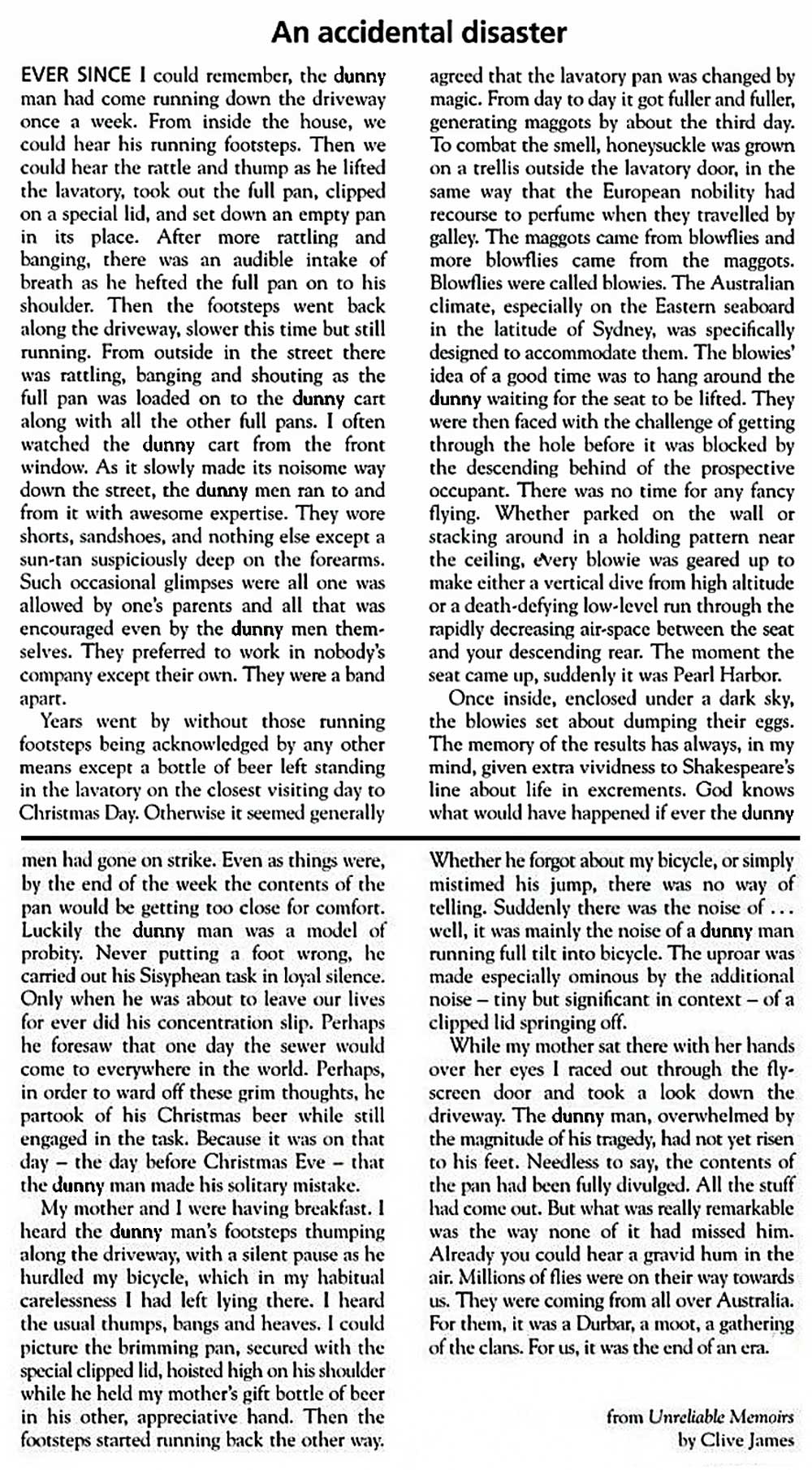 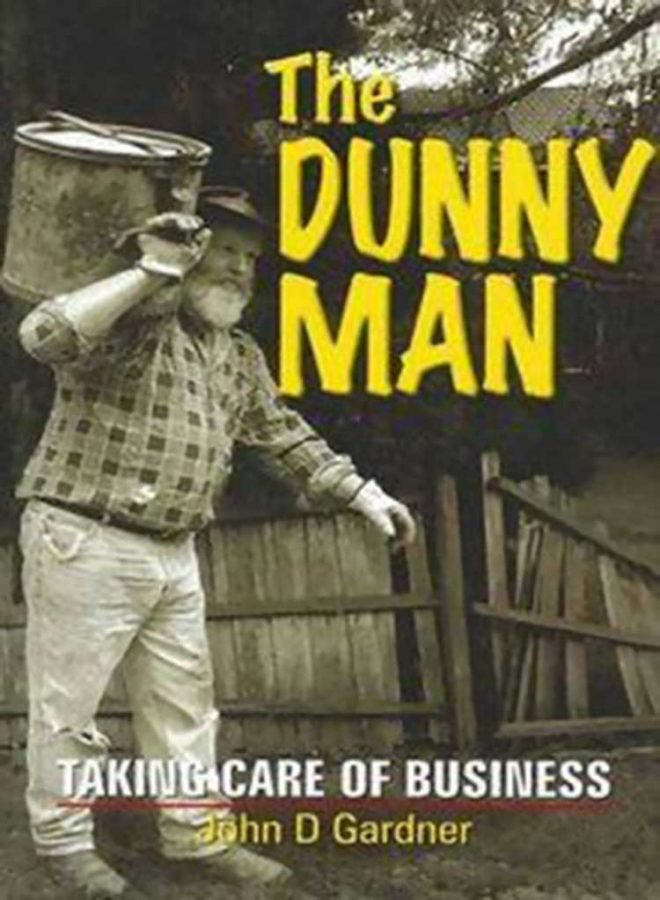 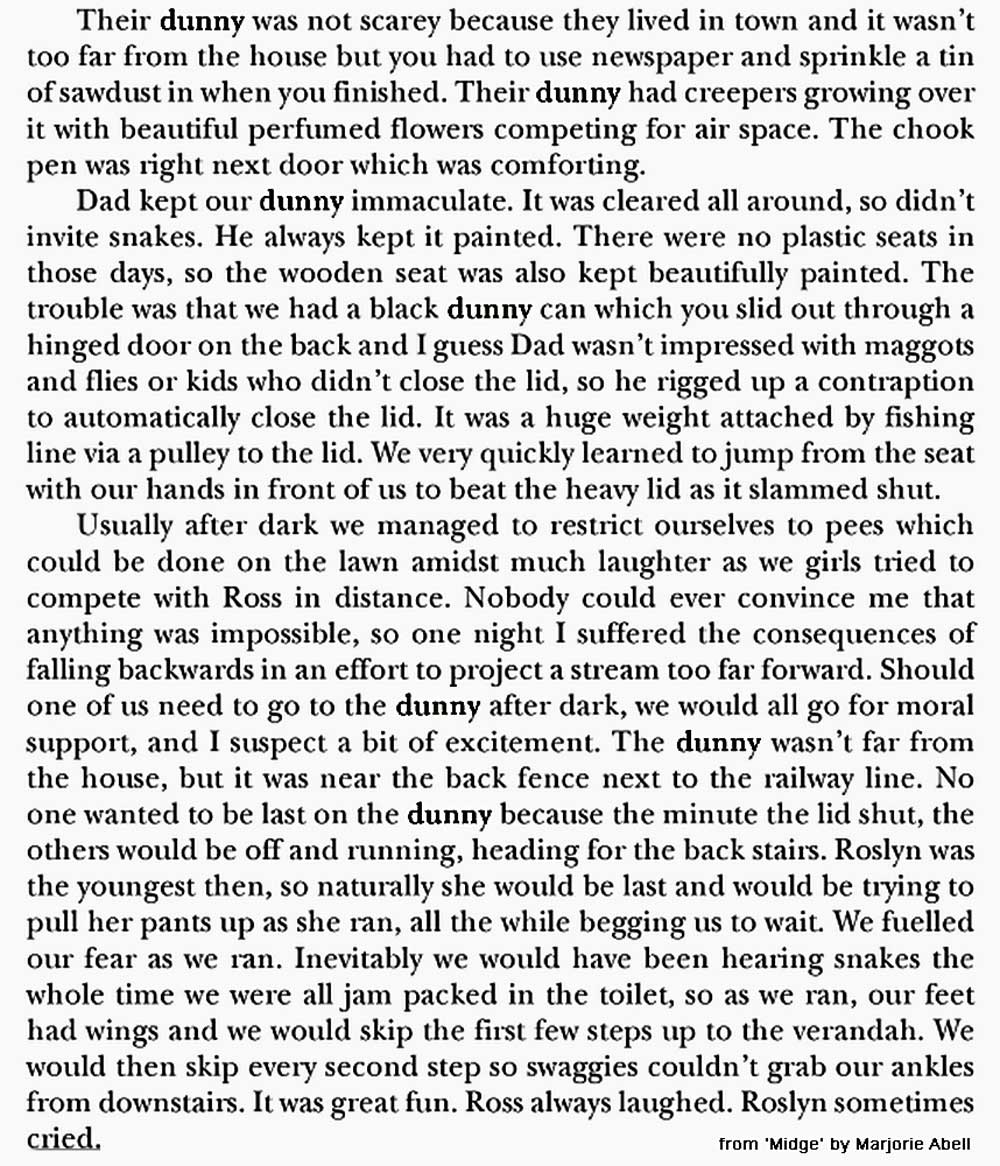 They were funny looking buildings, that were once a way of life,
If you couldn’t sprint the distance, then you really were in strife.
They were nailed, they were wired, but were mostly falling down,
There was one in every yard, in every house, in every town.

That’s why we had good cricketers, or my name isn’t Crump,
We used the pathway for the wicket and the dunny door for stumps.
Now my old man would sit for hours, the smell would rot your socks,
He read the daily back to front in that good old thunderbox.

And if by chance that nature called sometime through the night,
You always sent the dog in first, for there was no flamin’ light.
And the dunny seemed to be the place where crawlies liked to hide,
But never ever showed themselves until you sat inside.

The dunny man came twice a week, to these buildings out the back,
And he would leave an extra can, if you left for him a zac.
For those of you who’ve no idea what I mean by a zac,
Then you’re too young to have ever had, a dunny out the back. 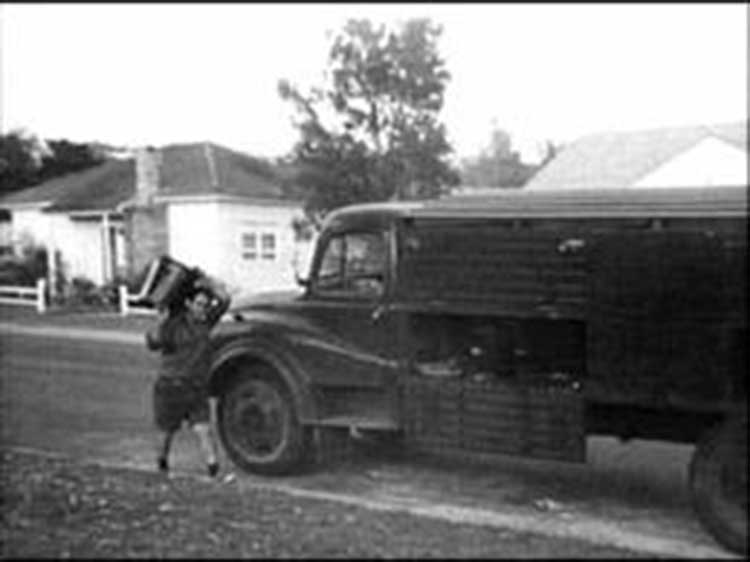 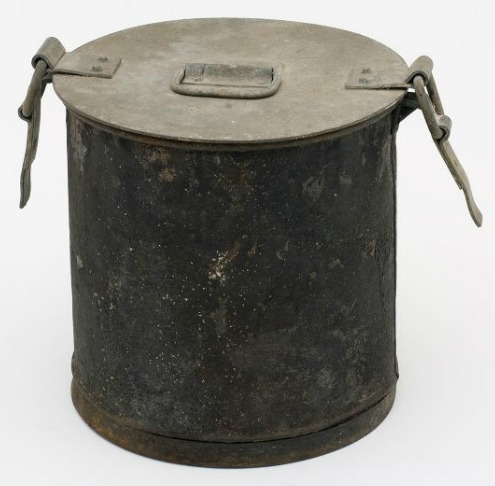 There was a redback on the toilet seat, When I was there last night.
I didn’t see him in the dark, But boy I felt his bite.
I jumped up high into the air, And when I hit the ground.
That crafty redback spider, Wasn’t nowhere to be found.

I rushed into the mrs, Told her just where I’d been bit.
And she grabbed my cutthroat razor, And I nearly took a fit.
I said ‘Forget what’s on your mind, And call a doctor please.
For I’ve got a feeling that your cure, Is worse than the disease.’

There was a redback on the toilet seat, When I was there last night.
I didn’t see him in the dark, But boy I felt his bite.
And now I’m here in hospital, A sad and sorry plight.
And I curse the redback spider, On the toilet seat last night.

I can’t lie down, I cant’ sit up I don’t know what to do.
The nurses think it’s funny but that’s not my point of view.
I tell you it’s embarrassing and that’s to say the least,
For I’m too sick to eat a bite, While the spider had a feast.

And when I get back home again, I’ll tell you what I’ll do.
I’ll make that redback suffer for the pain I’m going through.
I’ve had so many needles, I’m looking like a siv.
I promise you that redback hasn’t very long to live.

and the dunny has weaved it’s way right into the deepest corners of Australian lexicon: 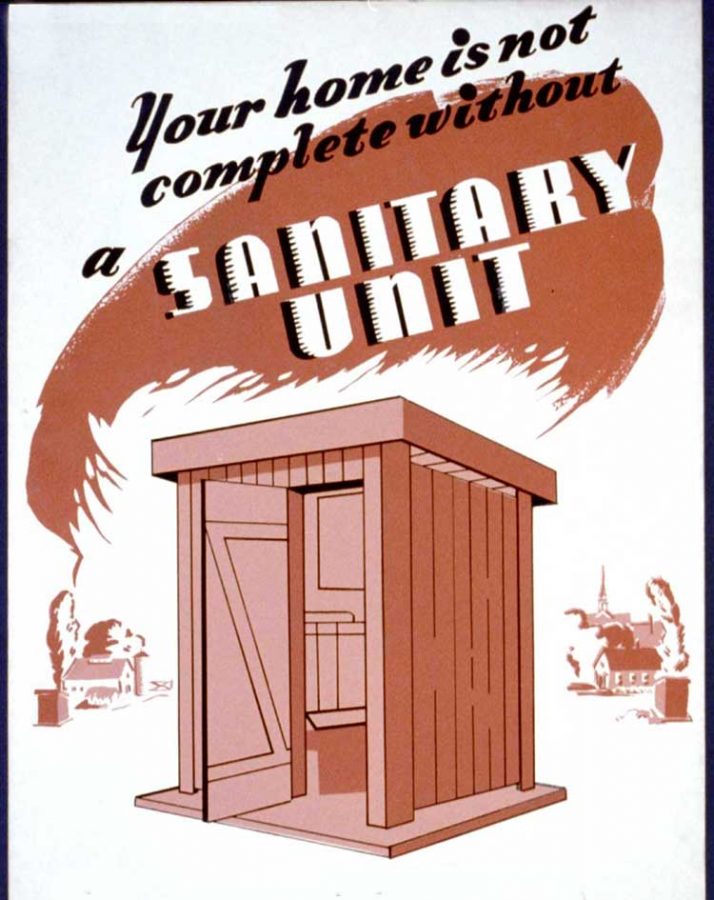