ROUND WHERE THE GRIMY MEN LURK

Rabbit-O!, Bottle-O! and Beer-O!, An Embryo Major Taylor With Mammy’s Beer,  A Battler From Out Back 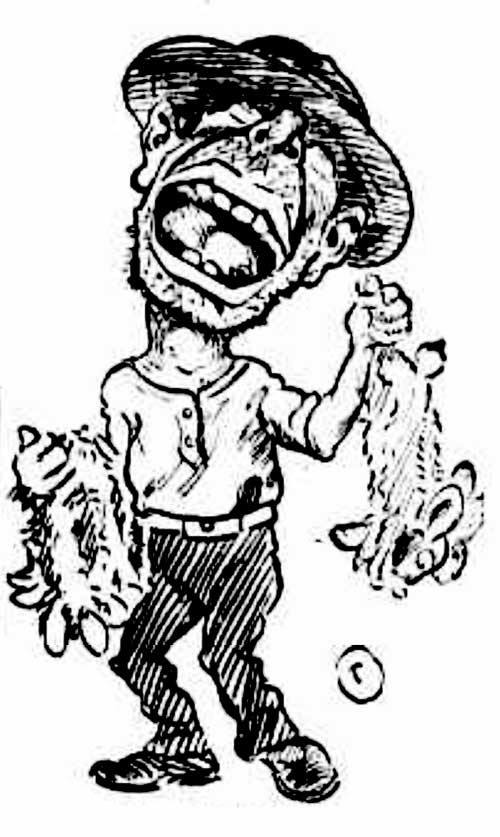 ‘Rabbit 0 ! Rabbit O ! Rabbit O !’. He yells with all his might, As he tries to sell his ‘insects’ In the slums from morn till night

To the weary Westerner who, in these dry times, is making herculean efforts to preserve what little grass is left, the ubiquitous bunny is a pest, and a darned nasty sort of pest at that. But to the hungry city slum-dweller, who cannot afford to pay the exorbitant sum of 10p. per lb. for tough, TOOTH-BENDING BULL FLESH, the bob-tailed doe and buck are a blessing disguised in a furry coat. If it were not for the rabbit, many poor people nowadays would not taste flesh once in a month. But while they relish the rabbit as an article of diet, they do not appreciate the discordant howls of the grimy person who hawks them in the slums. For this reason it frequently occurs that the merchant has to beat a hasty retreat from some quarters under a ‘heavy Arc’ of jam tins, old boots, and other missiles. The rabbit-O man usually starts out in the morning when most tired people are enjoying the last nap before ‘getting-up time,’ and he makes the welkin ring with his yells in such a pronounced manner that the weary would-be snoozer arises and in his wrath relieves his feelings by firing off some fierce cuss words at the household cat, the missus, and the kids. The rabbit-O man may be a very useful member of the community, but it would be a good idea to license only men who stutter, or better still, deaf and dumb men. 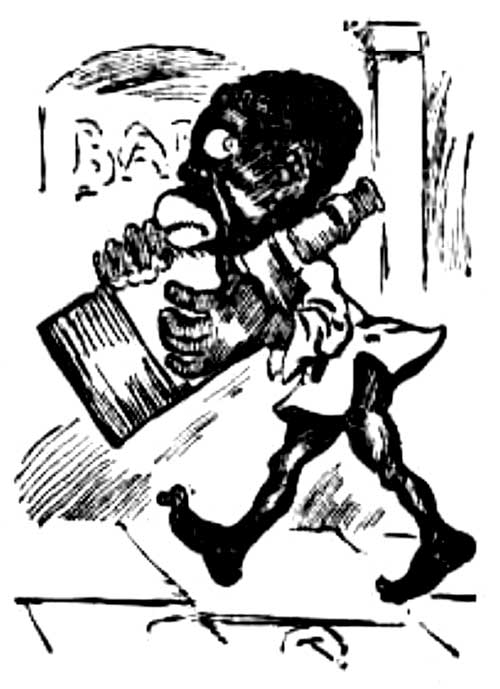 This embryo Major Taylor Is no Baptist ; for you see he ‘runs the cutter’ for his ma, when she goes on the spree

No doubt, if the godly Majah were to see this juvenile specimen of his race emerging from a third-rate pub with a bottle of beastly cheap beer clasped to his bosom, he (the Majah) would lift up the back part of the young coon’s pinny and spank him. This would be very proper, too, as it is a sad sight to see one so young— even though his pelt is black— being thus schooled into the use of Intoxicants. On the occasion on which we saw this small coon, he was clad only in – AN OVERGROWN DIRTY SHIRT, probably his old man’s. All the wee kids in the vicinity were guying him unmercifully. The kid, however, took little notice of their ribald remarks. He made a bee line for the place he called home, and after delivering his bottle of lush came out and pelted his tormentors with road metal, until a copper hove in sight, when he immediately vamoosed into the paternal cabin. It seems a queer thing that although the police see the kids every day emerging from pubs with beer for drunken fathers or mothers, they never take any steps to prosecute those who supply liquor to children of tender years. Perhaps Robert is too tired — perhaps he is ‘squared!’ 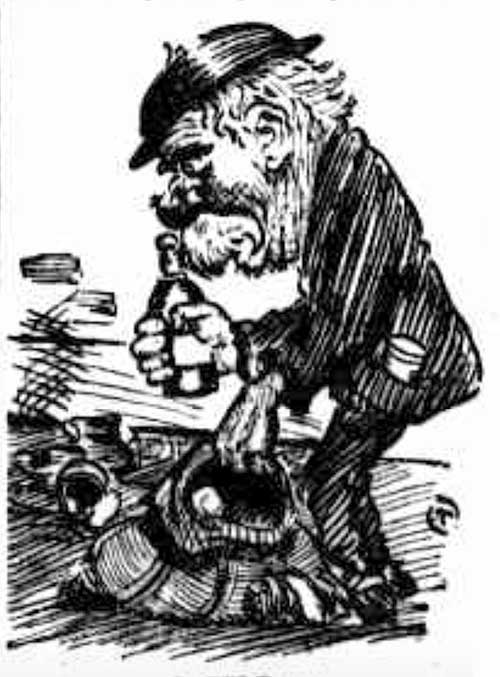 Lo, the bottle-O, worn and sad. Far better days he’s seen. Little he thought that he one day would search for the ‘dead marine.’

There are two distinct classes of bottle gatherers. One is the bottle merchant who having reached a position of affluence, is able to employ men to drive carts all over the city for the purpose of buying up all the ‘glassware’ from GOOD TEMPLARS AND OTHERS who hide their gin end whisky vessels at the back of the domestic fowl-house. The other is the frayed-out colonist – who prospects garbage heaps, back yards, parks, pleasure resorts, and other places, and gathers up the bottles that have been thrown aside. Of such a. class is the old josser here depicted. He is known as the ‘Dung Heap Digger.’ It is said that some years ago he had a fair amount of money, but his penchant for WINE, WOMEN, AND GAMING brought him down with a thump. However, whether that be true or not the writer cannot say, but on thing is certain, and that is, he has a superior manner to most of his kind, and appears to be ashamed of his grimy calling. The old ‘Dung Heap Digger’ is the butt of all the small boys in the localities which he visits, and many a lively hunt he has after them, only to return and find that other bad boys have purloined his bottles while he was hot on the chase. He is only one of his class, but there are hundreds like him who not only gather bottles, but also rags, bones, and other stray trifles – the latter especially when no person is looking. 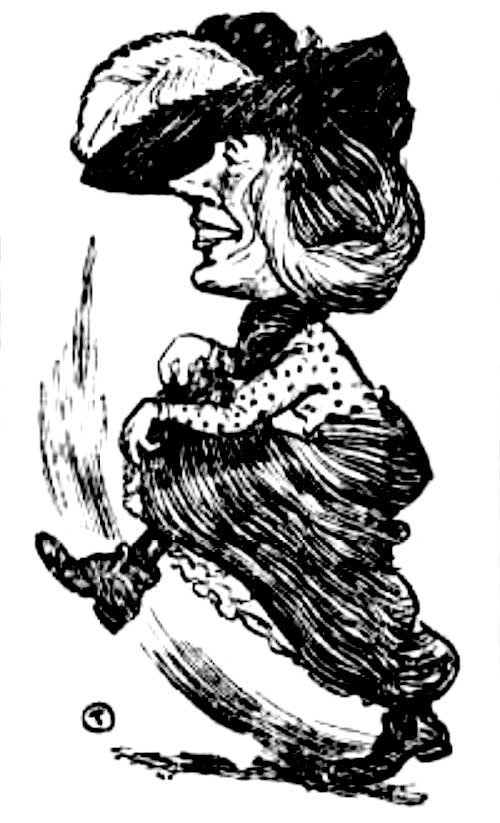 When Mary Ann’s out on the scoot she raises up her frock. And does a merry cake-walk around the slum street block

Ever since the cakewalk was introduced to the Australian stage by Charles Walker and lost lights it has become a popular pastime, not only with giddy young women, but also with Fossilised Flossies— particularly when they are well charged with cheap beer. ‘Twas in Harbour-street, close to THAT GODLY SLAVE SHOP run by the vulture-beaked Booth that this faded, specimen of Flossiedom was observed, in company with others, prancing about like a skittish horse (or mare). She was, of course, in a state of semi-drunk, as were her companions. The smell that permeated the air as we passed was strong enough to induce a rank old he-goat to go out of the stink-raising business. These dirty old played-out phrynes* are a nuisance to everybody about the neighbourhood. They are becoming more brazen and disgusting every day, as the police very rarely visit the particular portion of the street which they monopolise – chiefly on Sundays. Some time ago ‘Truth’ drew attention to their carryings on, and THE POLICE SWOOPED DOWN on them one fine day and bagged several, with the result that the others made themselves scarce for a period. The man in blue has, however, been conspicuous by his absence of late; hence the renewal of their disgusting pranks. Let us hope that another crusade will be made against these foul old flossies in the near future, and that some of them will he shunted off to Biloela. 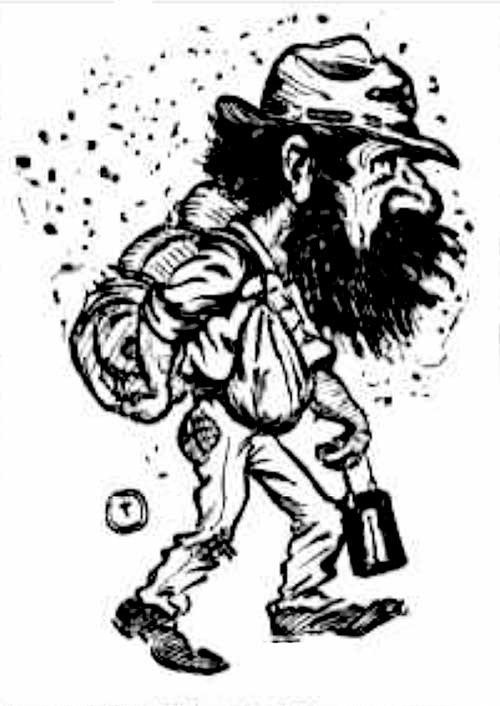 A WESTERNER ON HIS HOMEWARD WAY

He came to town on New Year’s morn, aboard the Western Train. He met a Flossie, now he’s off Out West to work again.

This is the type of individual who, after working hard for months, finds his way to the city to spend his Xmas or New Year. Like many of his class, his first mission on arrival is to hunt round for a nice young woman to keep him company and ‘SHOW HIM THE SIGHTS.’ As most city people are aware, the human he, provided he has cash, experiences little difficulty In finding a sweet siren who Is all too willing to ‘take on’ the job. The result is that, after a week or two in town, the gullible grafter finds that he is minus cash, his siren has disappeared, and he Is forced to hoist ‘Matilda’ and make back to the woolly West to earn another fat cheque for the city lass, who takes him down as religiously as he ventures to come to Sydney. Some day, remote but conceivable, the guileless bushwhacker, who puts on no end of ‘dog’ in the rural hamlets and western villages, will come to recognise that the enchanting smile of a city slum-bred she is as the smile of fortune – very fickle and fleeting. Moreover, when he does ‘come in. he will probably learn to stow his ‘bit o’ bunce’ in some place where even the grasping, clammy claw of the pointed harlot cannot reach It. Until that day arrives the back blocker will always prove a rich harvest for Flossie and her male accomplice, who always stretches forth his grimy paw for the big end of the ‘swag.’

(*Note: Phryne: a legendary courtesan in ancient Greece who was put on trial for impiety. She was acquitted after her defender Hypereides removed her robe and exposed her naked breast to the jury)