Opussum hunting is one of the most popular of our sports, whether we regard the keen appetite of the aboriginal, or the mere lure of animal conquest, implanted in the bosom of his more civilised compatriot the ‘native’ or for the matter of that the ‘new chum.’ It is a pastime that may be freely indulged in without those terrors of the pains and penalties of game regulations, which in the old land drive stolid Hodge to desperation and defiance of law, and sometimes to involuntary settlement in this hemisphere. The bush owns no keepers and there it is that the wily ‘possum makes his local habitation, stirring the idle of our youthful population to deeds of arms.

‘The deer delight of a shining night In the season of the year,’ as the old song says, with slight alteration suitable to the occasion. The opossum is one of the prettiest, and when night holds her sway over mankind, the liveliest of four-footed beasts. He belongs to an extensive marsupial race widely scattered, and separated into branches and families like certain bipeds that know not and hold no intercourse with each other. The Didelpliidra of America and the Phalangistra or Phalangers of Australia are very distant marsupial relatives known by the common name of ‘possum. The Australian member of the family is placed by naturalists under a sub-division named Trichosurus. We have not however, now to discuss scientific distinctions, but briefly to note the esteem in which the Phalanger in all his varieties, is held alike by aboriginal blackfellow, and native Australian youth addicted to the pursuit of game as an article of food or an object of pastime. 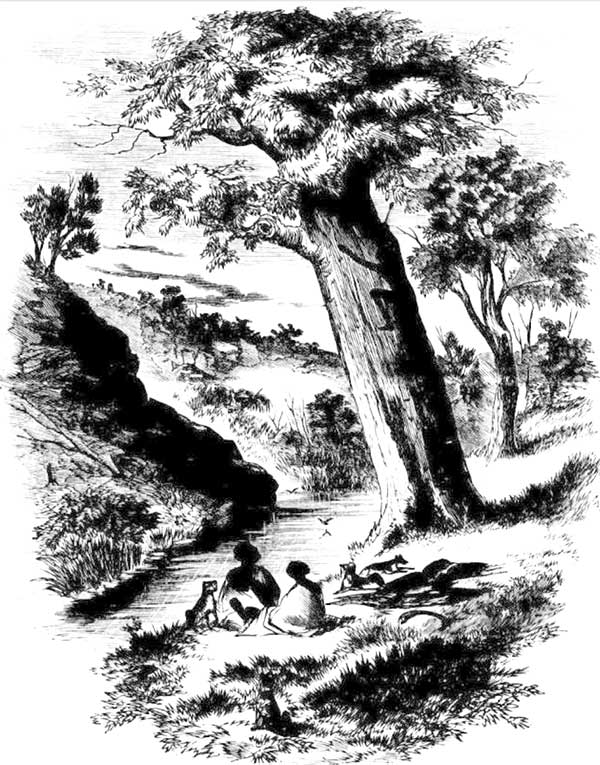 The artist has pointed out the manner in which the blackfellow secures his prey and it indicates too the singular acuteness which this lowly race at times display, when, that grand motive power, hunger, stirs the dormant human faculties to action. The hollow trunk or branch of a gum tree is the favourite residence of the little animal. Here he reposes like the world of fashion during the day, only growing lively and disposed to the pleasures of the world when the shades of night fall on common humanity. The keen eye of the savage can tell in a moment whether an opossum sleeps within a gum, from the indentations on tho bark, too slight for other eyes to note, made by the sharp claws of the animal as he courses squirrel fashion up the tree. Blackee ascends the tree almost as nimbly as the ‘possum, by cutting notches for his toes in the trunk with a tomahawk he carries with him, as shown in the illustration. Young Australia pursues this game in a different fashion. On a bright moonlight night, armed with his gun, he repairs to the woodland bush, and be it not too near a gold-field or a Chinese encampment – novel industries not adapted to the preservation of game – his sport is certain, can he take fair aim at the little animal sporting it amongst the branches and the boughs of the gaunt Eucalypti. The flesh of the opossum is highly relished by the blackee, who is not nice in his eating. For us opossum flesh is as yet a new sensation to come; it is variously described as resembling rabbit and pork, a likeness in dissimilarity that leaves sufficient margin for the imagination of taste. The skin of the animal, which is of various hues, from grey to brown and black, is valuable and highly esteemed when made up into a ‘rug’ as a covering for travel in the bush. There is nothing better, indeed, as a coverlet, when one is forced to camp out for tho night under the superior covering of a gum tree’s scanty foliage. The ‘possum rug does the duty of many blankets as regards warmth, and it effectually resists, the winter rain, or the drenching night dews of autumn. From forty to fifty skins will make a capacious rug, and the blacks are unrivalled in their skill with the needle in joining the skins, whether we regard the neatness of the handiwork or its lasting strength. A rug, all ready-made, may be purchased in town at various prices from £2 upwards. It remains only to be said in this rapid sketch of a familiar scene in Australian country life, that the ‘possum makes the tamest and most cheerful of pets. He is a pretty little creature, as sharp as a fox, and as lively as a squirrel; and, with his nimble movements and sly ways, will afford hours of entertainment to a kind master. He must not, however, be left too much to the freedom of his own will at nights – or there will be a Bad account of the China chimney ornaments of the mantelpiece in the morning. The Acclimatisation Society, in its zeal to export animal novelties for exchange, will soon familiarise him to the pet-loving British public, who, would do well to cherish him. Meantime, we cannot do better, following the pleasant colonial fashion, which links old home associations to bush life of Mimes rather oddly, than suggest that this pretty animal should, be called the Australian squirrel.