The Gist of a Tryst with a Cyst

When I first came to live in the Derwent Valley in Tasmania in the mid 1970s, and as a dog owner, I was surprised to learn of the prevalence and dangers of Hydatid disease – something I had never heard of at that time.

Hydatids caused the death of a Tasmanian child every few years until 1968. Deaths occurred when a minor injury ruptured a hydatid cyst of the liver. This infectious disease is caused by a tiny tapeworm, Echinococcus granulosus, an intestinal parasite of dogs. Sheep that swallow tapeworm eggs when grazing on pastures contaminated by dog faeces may develop hydatid cysts in their lungs and livers. Larval worms in the cysts develop into mature worms in the intestines of dogs fed on sheep’s offal. Humans in contact with infected dogs can acquire the same cysts. Cysts discovered in time can be removed surgically, but fatal cases are inevitable. In 1966 over half of adult sheep had hydatid cysts, and more than 1 in 8 rural dogs had adult worms. In the 1950s Tasmanian surgeons operated for human hydatid disease about once every week.

I remember the mandatory requirement to take your dog annually to a ‘run’ to be chained up all day with other dogs while they were inoculated against Hydatids. 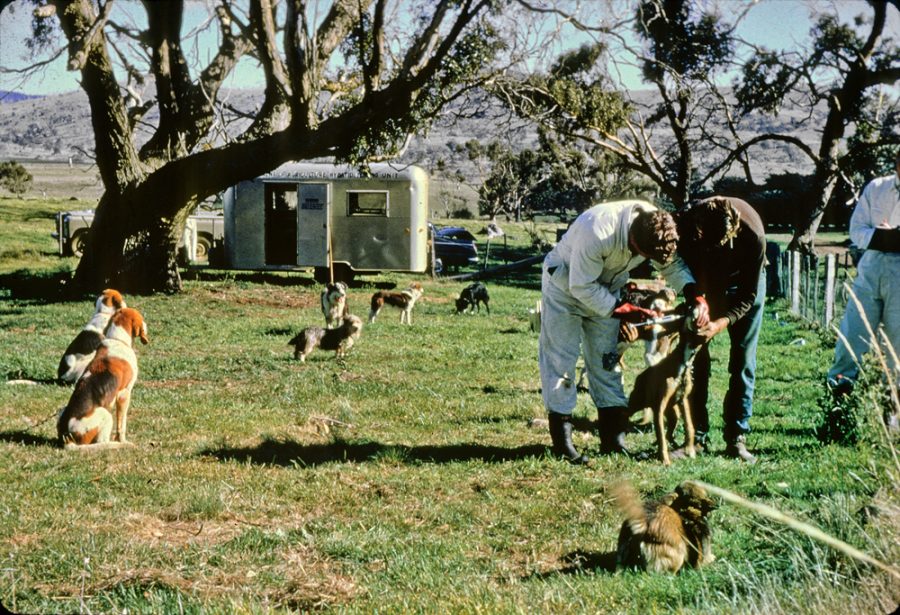 In the 70s there were several elderly patients in the hospital I worked at who still had untreated, growing hydatid cysts.

At the meeting of the Royal Society of Tasmania held on Monday evening last (says the Tasmanian Mail of July 19} the following notes on the Native Hop (Daviesia latifolia) as a cure for hydatids, were read by Mr. Alfred J. Taylor. 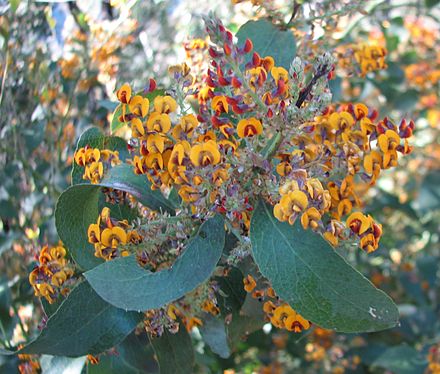 At a recent meeting of the Royal Society I called attention to the value of one of our bush plants (popularly known as the ” Native Hop”) as a cure for hydatids. Since then I wrote to a lady in Melbourne, who derived benefit from the use of the herb, and she has supplied me with the following information regarding her own and another case and the method of preparing the infusion to be taken.

“There is a man I know well,” she writes, ” a near neighbour who has been completely cared, lie took the hop for about three weeks, and then vomited the hydatids which came up like oysters. The same man twelve years ago was ill for three years with the same complaint, and was operated on four times. You can imagine his dismay when he got his old disease. He went to the doctor, who said he must wait till the cyst was ready for tapping. I told his wife to try the hop, which they did. The man told the doctor what he was taking, and he said, ” Oh, take it – it won’t hurt.” But at the end of a few weeks, when he found his patient getting better and the swelling going, he told him to leave off his medicine and stick to hop. He is now quite well without any operation. ” Regarding her own case she writes : ” I was not so bad as this myself, but I was bad enough, and my doctor fully intended to operate if his medicine did not act. I took the hop instead without saying anything (and he believes I suppose to this day he cured me). I took it for about six weeks as far as I can remember now. I have been told of several bad cases by friends of mine on whose word I can rely.” With regard to the preparation of the hop as a medicine she writes :—” Two handfuls of the leaves should be placed in a pint of cold water, set by the fire, and after coming to the boiling point, allowed to simmer for half an hour. Dose:— A wine glassful three times a day, or oftener will not hurt, The infusion must be used until the patient is better.”

There can be no doubt that many of our native plants possess excellent medicinal properties, and I have thought it worth while to bring under the notice of this society the results that have attended the use of the plant under notice in undoubted cases of hydatids.

Ms. Morton expressed regret that the medical members of the society were not present to discuss the subject and suggested that much good would result if they attended more frequently and contributed papers. He had sent specimens of the plant for analysis.

Mr. C. H. Grant hinted that the probable good effect of the hop medicine was its therapeutic effect as a bitter and a tonic. In that view there was another way in which it could be taken in a more agreeable form – viz., as the bitter ale brewed in such large quantities, which, as they all knew, was a good stimulant if taken in moderation. (Laughter).

Mr. E. D. Swan said that the hop plant alluded to was a nuisance, as it ate away all the grass.

Mr. Curzon Allport : It grows on all our mountain ranges.

As the result of a long and thorough investigation, we have been forced to the conclusion that very little is known to the medical profession of the distressing disease known as hydatids. Usually persons who are afflicted with this foul malady submit themselves to the treatment of their family doctor, who does, to the best of his ability, all he can for the sufferer, but for lack of knowledge as to the cause or location of the cysts, is, in the great majority of cases, found prescribing ” in the dark,” and, of course, unable to effect a cure; the outcome is the patient lives on, it may be for years, life which is worse than a thousand deaths, and is ultimately given up by the doctor uncured, and pronounced incurable. You must know such cases are of every day occurrence. Such was the case with Mr S. A. Palmer, of Invercargill, a most notable case, declared by the best colonial medical skill to be hopelessly incurable, and other cases in Tasmania of an equally pronounced character. When they were thus relegated to the list of incurables – that is, given up to die – they were induced to give Vitadatio a trial, and today they are restored to good health, and, what is equally necessary, to their families. 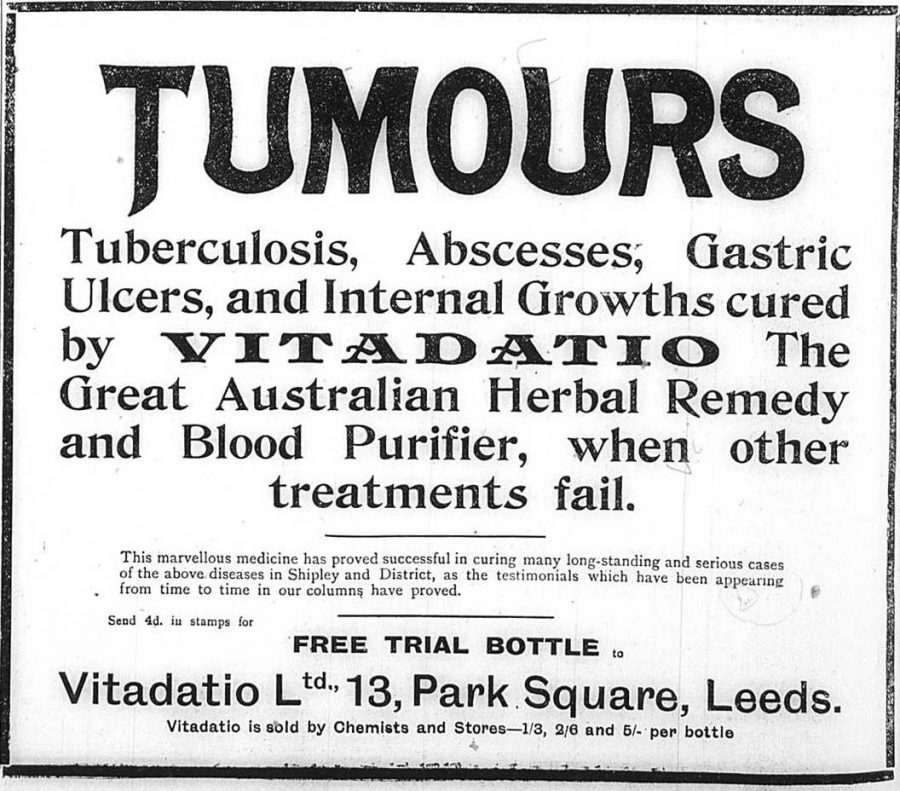 Hydatids are a bladder-like substance which grow either on the liver or in the bowels, and also, in the case of females, in the uterus. The hydatid, when fully developed, is filled with a yellowish fluid, upon which it subsists, and thus robs the sufferer of nourishment which, in a healthy person, goes to build up the body. Sometimes these hydatids grow together, like a bunch of grapes. Some are elongated, like a bean, and others are as long as an ordinary leech, and have a sore of claw by which they are attached to the liver, bowels, or uterus, as the case may be. The hydatid cysts are, in shape, like an egg and each cyst contains the possibility of many thousands of the hydatid proper. This accounts for the rapidity with which this disease breaks down and disables the human body.

The causes, amongst others, of hydatids, are the following: Drinking: impure water or milk, and especially milk from a diseased animal; eating diseased meat, and all under-cooked pork; fondling pets, such as cats or dogs, etc. Judging from what Vitadatio has done in curing this very prevalent disease, we are now safe to say it is a specific for this terrible malady, for, whilst it acts as food to strengthen and build up the body, it is, at the same time, a certain destroyer of this ever gnawing and wasting disease, and persons so afflicted should not delay to give Vitadatio a chance to do its work. Vitadatio is sold by all chemists and dealers in medicines.

HOBART, Friday: Serious concern at the growing incidence In Tasmania of hydatids was expressed by the Minister for Health (Dr. Turnbull) today.

Dr. Turnbull said the number of new cases treated at the Royal Hobart Hospital had increased from 14 in 1946-47 to 20 In 1947-48. From July till October this year nine new cases were treated.

He said the disease could easily be prevented, and should not occur at all. It was the Intention of the Public Health Department to display films of the disease at area schools. Illustrated pamphlets would also be Issued.

Hydatids could be prevented, said the Minister, by never feeding dogs on raw offal removed from carcasses of sheep. The offal should be boiled for 10 minutes.

The Tasmanian Government Film Unit at Hobart yesterday shot the final sequence of a documentary film dealing with hydatids, which is being made to the order the of the State Health Department.

This will be the first of a series of documentary films being undertaken by the Health Department to educate the public in the prevention of dangerous diseases. Others to be made soon will deal with tuberculosis and dental decay. The hydatids film was authorised by the Minister for Health (Dr.Turnbull).

The Director of Hospital and Medical Services (Dr. Carruthers) assisted in an advisory capacity.

The Lawrenny Estate, Ouse, was chosen for the filming of several sequences, because this property has some of the greenest pastures to be found in Tasmania at this time of the year. A spokesman for the unit pointed out yesterday, however, that the Lawrenny Estate was free from hydatids. The manager (Mr. L. J. Haney), Mr. G. von Bibra, and other officers of the Agricultural Bank, which owns the Lawrenny Estate, co-operated with the camera team.

At the Royal Hobart Hospital, the pathologist (Dr. R. Pitney) co-operated with the “shooting” of medical sequences. The final sequences yesterday were filmed at the home of a Sandy Bay resident. The film, which will be in colour, is expected to be completed by the end of May.

Tasmania declared provisionally free of hydatids in dogs and livestock.

But it seems the disease is re-emerging – earlier this year 8 per cent of dog faecal samples from Tasmania were found to test positive to hydatids. An investigation by TV news show “7.30 Tasmania” found a low level of awareness among dog owners about the risks of hydatids. 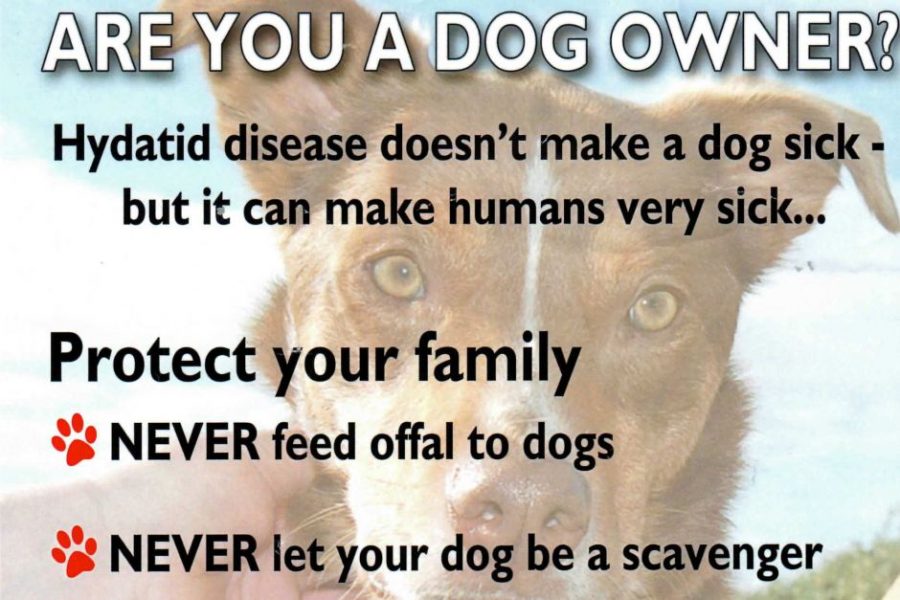 Before a dog can enter Tasmania, its owner must have evidence that it has been treated with praziquantel at a dose rate of 5 mg/kg body weight within 14 days before entry to Tasmania.