European rabbits (Oryctolagus cuniculus) were introduced to Australia in the 18th century with the First Fleet and eventually became widespread. In mid 1860s there was an epidemic of rabbits which originated with the release of 24 wild rabbits by Thomas Austin for hunting purposes in October 1859, on his property, Barwon Park, near Winchelsea, Victoria. While living in England, Austin had been an avid hunter, regularly dedicating his weekends to rabbit shooting. Upon arriving in Australia, which had no native rabbit population, Austin asked his nephew William Austin in England to send him twelve grey rabbits, five hares, seventy-two partridges and some sparrows so he could continue his hobby in Australia by creating a local population of the species. William could not source enough grey rabbits to meet his uncle’s order, so he topped it up by buying domestic rabbits. Many other farms released their rabbits into the wild after Austin. Rabbits had become so prevalent within ten years of their introduction in 1859 that two million could be shot or trapped annually without having any noticeable effect on the population. It was the fastest spread ever recorded of any mammal anywhere in the world.

The silver-haired rabbits and golden pheasants, per the ship Tiger, from England, have been purchased – the former by Mr. KELLY, the Harbour Master, of Bruny Island, and the latter by Mr. BROUGHTON, of Newtown. There were some years ago, a few pheasants brought to the Colony, and have since been in the possession of Mr. HUMPHREY; but we know not how they have succeeded, though we are aware they are not extinct. Mr. KING’s silver-haired rabbits have already increased to some hundreds; and the common rabbit is becoming so numerous throughout the Colony, that they are running about on some large estates by thousands. We understand, that there are no rabbits whatever in the elder Colony.

Anything new and effective in rabbit traps is sure of a cordial reception in Victoria, and, aware of this, the O.C. rabbit trap – an illustration of which (set for action) is given below has recently been introduced by Messrs. Tye & Co., Melbourne, who are the wholesale agents for Australia. 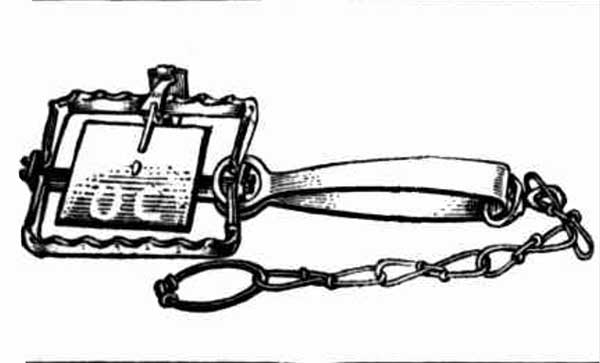 The O.C. trap is made by the Oneida Community, Ltd., of Niagara Falls; the company have been manufacturing traps for over 50 years for all sorts of animals, from the squirrel to the grizzly bear, and their traps are recognised as standards throughout the world; the climate of North America is a severe one, ranging from 100deg. in the shade to 40deg. below zero, so that the manufacturers have to deal with all conditions of weather, and use only carefully selected metal, as well as skill and experience, to make traps to catch such animals as the otter, beaver, lynx, wolf, sable, minx, bear, etc. They publish an interesting trappers’ guide, by Mr S. Newhouse, giving much valuable information respecting trappers, skins and their preparation. Some time ago they turned their attention to the requirements of the rabbit-trapper, and brought their experience and special machinery to bear upon the subject, with the result that they have produced a perfect trap at about half the price usually paid for the hand-made trap. The agents describe it as strong enough to hold a fox, quick in action, only half the weight to carry, spring steel and uniform in temper, and neatly and smoothly finished, and state if residents are unable to procure the trap from storekeepers in their district they will forward them a sample post free upon application. Their address is Sturt St., South Melbourne. 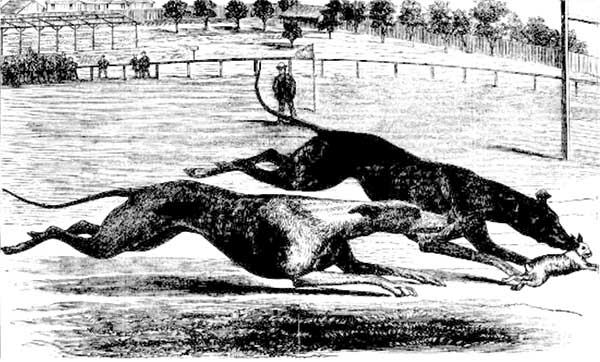 We give this week an illustration showing a brace of greyhounds picking up a rabbit and while wishing the club and the sport they advocate all success, at the same time deprecating the sentimentality that would extend the term cruelty to animals so far in this direction, we hope the officials will carefully guard for the future against I the irregular entering of greyhounds, and other I laches which, if allowed to go unchecked, will surely end in a thorough upset of what otherwise may and should become an excellent amusement for our citizens who have not time to go further afield in search of sport.

Mr H. P. Anders (Murtoa) moved, and Mr Tobin (Murtoa) seconded: That the conference objects to the destruction of rabbits by Dr. Danysz’s method of inoculation by disease. Mr William Wilson (Romsey) said that he sincerely hoped the convention would not be instrumental in placing obstacles in the way of the experiments to be undertaken by Dr. Danysz. The Murtoa people could not be troubled with rabbits, or the society would not have brought forward such a resolution. The rabbit pest was the greatest plague from which Australia suffered. It meant an annual loss to Victoria alone of two millions sterling. It would be a very wrong thing to tell Dr. Danysz to go home and leave Australia to the rabbits. He believed that under proper supervision any danger that there might be from Dr Danyz’s system could be minimised, and in his opinion the opposition was being worked up in the interests of the rabbit trappers. (Cheers) To talk in the interests of the rabbit industry was absurd. The sons of farmers were attracted by the amount of money made from rabbit trapping, and when they had been at it for a short time they were fit for nothing else. (Laughter) He would move as an amendment:  That the convention urge the Federal Parliament to place no obstacles in the way of the carrying out of Dr. Danysz’s experiments. Mr Lawrence (Kyneton) seconded the amendment. He said that since the rabbits had taken possession of country with which he was well acquainted an immense amount of money had been lost to the State by reason of the damage done. Mr de Castella supported the amendment. The rabbit industry as it was called was not worth one moment’s consideration. Every thousand pound’s worth of rabbits exported meant more than a thousand pounds in loss in other directions. Mr Glenny (Numurkah) said that he and his colleagues had been instructed by the society they represented to vote for the resolution introduced by the Murtoa delegates, but personally he was in favour of the amendment. (Laughter) He had, however, to be loyal to the society he represented. Mr Rhind (Geelong) said the matter could safely be left in the hands of the Government. Mr Mogg (BalLan) said there was not the slightest danger in allowing Dr. Danysz to carry out his experiments. Mr Hortsman (Maffra) said it was our duty to exterminate the pest and that is what we should be thinking about. Mr Duncan (WarracknabeaI) said it was a matter for regret that the motion had been moved. Most farmers would hail with joy the announcement that the very last rabbit was on the gridiron. Mr M. Tier (Echuca) warned Gippsland farmers that it was only a matter a short time when Gippsland would be over-run with rabbits. (Mr Kendall, M.R.C.V.S., said the disease that would be introduced by Dr. Danyez’s micro-organism was a disease already in the country. Thirteen sheep had died from it at Melton a couple of days previously. People who urged that every precaution should be taken were quite right. He did not hold a brief for the rabbit or the rabbit-trapper, but he advised caution. Who could say that, because the disease during experiments in Paris did not spread to domestic animals, it would not do so here. No doubt proper precautions would be taken, but to argue that the experiment was to be carried out on an island was useless. The island was only half a mile away, from the mainland, and the organism could be conveyed to the mainland by flies or in the dirt adhering to the feet of birds. The amendment was carried by an overwhelming majority.

(Note: In 1906 and 1907, Jean Danysz, of the Pasteur Institute of Paris, conducted trials on Broughton Island, New South Wales, of a strain of Pasteurella bacteria he had developed, which proved to be specific to rabbits, but it proved to be a less-than-satisfactory control measure)

The Parker rabbit exterminator is an ingenious automatic machine, designed for the wholesale destruction of rabbits. It is of simple construction, and made of rust resisting metals. The pastoralists and experts who witnessed the field demonstrations were unanimous in declaring it to be the most perfect means yet invented for the extirpation of rabbits and the one most likely to reduce the pest in the Australian States to a minimum. 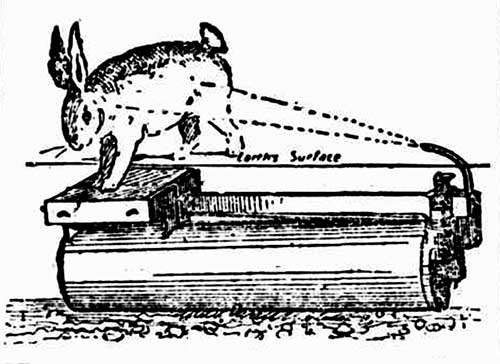 Briefly, the machine consists of a cylinder to which are attached a valve and nozzle. Connected with the valve is a small brass shaft and to the end a platform is fastened, similar to that of an ordinary steel rabbit trap. The cylinder holds about a quart of slightly sticky poisonous solution and a quantity of air is pumped into it with an ordinary bicycle pump. Now it is well known that for some reason all rabbits in the neighbourhood of a newly made scratch or furrow will run along it at night. The Parker machine is, therefore, buried in the earth (nothing being visible except the tip of the nozzle), in such a position as the rabbits following the furrow must pass over the hidden platform. Immediately the platform is trodden upon a double jet of the poisonous solution is ejected with great force from the nozzle on to the fur of the rabbit and the machine is ready in an instant to treat the next comer in a like manner. The action of the machine is silent, and the rabbit passes on unaware of what has happened, but soon discovering some objectionable matter upon its fur licks it off and dies. One charging of the cylinder provides at least 300 squirts, and the machine, once set, requires no further attention until the whole of its contents are exhausted. According to the ‘Australasian’, the machines (how many is not stated) were set for one night in a furrow 300 yards long, and it is estimated that fully 300 rabbits were destroyed. 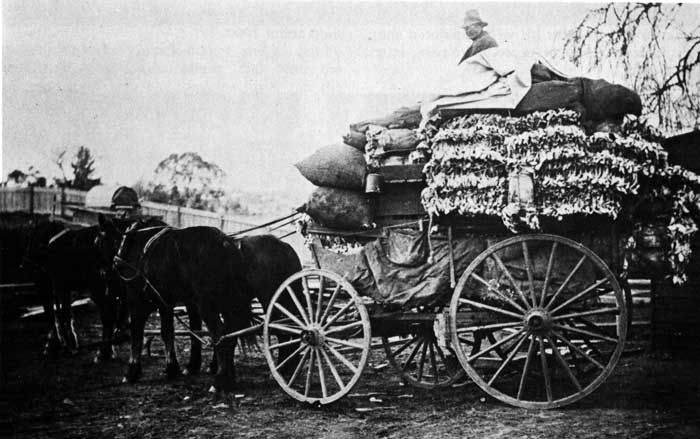 In 1950, following research conducted by Frank Fenner, myxoma virus was deliberately released into the rabbit population, causing it to drop from an estimated 600 million to around 100 million. Growing genetic resistance in the remaining rabbits had allowed the population to recover to 200–300 million by 1991.

To combat that trend, over three years from June 1991, the Commonwealth Scientific and Industrial Research Organisation (CSIRO) comprehensively tested the potential of calicivirus, which causes rabbit haemorrhagic disease (RHD), for biological control of wild rabbits. The virus escaped from a quarantine compound on Wardang Island, South Australia, where the field tests were being carried out and, by late October 1995, it was recorded in rabbits at Yunta and Gum Creek, in north-eastern South Australia. By the winter of 1996, the virus was established in Victoria, New South Wales, the Northern Territory and Western Australia.

A team headed by virologist Francisco Parra, working with the University of Oviedo, in Asturias, northern Spain, identified a new variant of the virus in 2012. The pathogen, a new strain of K5 (RHDV1), is both extremely lethal and highly contagious. In 2017 it was released by Australian authorities at around 600 points on the continent. Owners of domestic rabbits were advised to vaccinate their animals. In southern Europe, the scarcity of rabbits threatens the conservation of endangered predator species higher up the food chain, that depend on small game such as rabbits. These include the Iberian lynx and the Iberian imperial eagle. For that reason, the biological warfare on rabbits in Australia is a serious concern for conservation experts working in other parts of the world, where the preservation of a viable rabbit population is essential.