A wedding in Cheltenham early in the 20th century certainly was a large and festive occasion. It also garnered an enormous number of the household items needed by newlyweds in the new century. When our Sarah Judd married Jesse Scott in Cheltenham in 1902, the local paper described the event as follows…

In the holy bonds of matrimony were married on Wednesday June 22, Miss Sarah Ellen Judd, daughter of Mr. Richard Judd (Richard Langridge) of Cheltenham and Mr. Jesse Scott, son of Mrs. L Scott of South Brighton. The esteem in which the bride’s father is held by the residents of Moorabbin, his long residence in the district and his connection with the public as an electoral officer augmented the unusual interest aroused in what unquestionably turned out to be a picturesque wedding. The Church of Christ, Cheltenham, in which the service was celebrated was most tastefully decorated – wedding bells, lilies, ageratums and festoons of white ribbon contrasting with orange, lemon and citron nesting in the glossy green foliage. Two dandy arches under which the happy pair passed gave a crowning touch of stateliness to the whole. The brides personal attractions were added to in a wonderfully conceived and prettily trimmed white lustre wedding dress with usual veil and wreath while she carried a choice floral bouquet, a gift of the bridegroom. The bridesmaids – Misses Bertha Judd (sister of the bride), Inez Judd (cousin of the bride) and Emma Scott (niece of the bridegroom) – wore cream dresses and each held a crook, ornamented with red camellias and foliage with ribbon trimmings to match. The groomsmen were – Messers Cyril Judd, Harold Judd and Reuben Penny. The Rev. Pond of the South Richmond Church Of Christ solemnised the marriage, the church being crowded with relatives, guests and onlookers. Subsequently the bride held a reception in the Mechanics Hall, Cheltenham when some 160 guests proposed their solicitations and, afterwards, sat down to a recherché nuptial feast. The toasts of the “Bride and Bridegroom”, the “Bridesmaids”, “The Parents” of the newly married couple and “The Officiating Minister” were duly observed each with musical prompts. After a brief interlude, the less serious and not less enjoyable business of the evening commenced and continued until the wee small hours when music, songs, recitations, dance and tunes lent their aid in quick succession to make the time fly by less quickly for the merry-makers. Mr. Clarence Judd achieving more than usual praise as master of ceremonies.

The incredible list of presents received by the bride was also published and has been invaluable in identifying a large number of the friends and family of the Judd family in Cheltenham at the turn of the century.

Many of the guests above were either local council and /or local church members.

A major present to the bride was an ANA (All Native Australian) sewing machine. 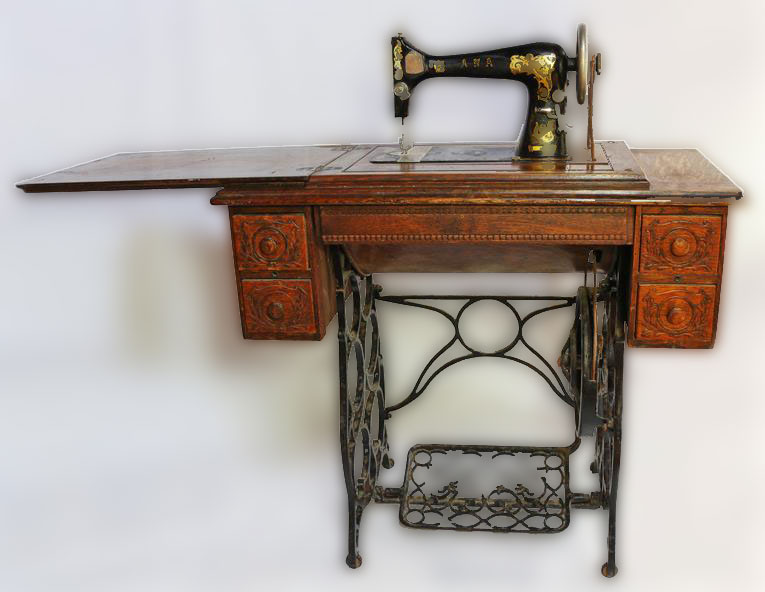 Sewing machines in the early 20th century were becoming popular household items in Australia. They were promoted as saving money and time and having the ability to create unique, individual items. Both machine and cabinet were made to be attractive and therefore appealing to the lady of the house. Decals of the map of Australia, showing states and capital cities, and of the company’s coat of arms with the kangaroo and the miner, the wheat sheaves and the Victorian emblem, gave the impression of a very patriotic company, particularly after the Federation of Australia in 1901.  A.N.A. however is the registered trademark of manufacturers Biesolt & Locke from Meissen, Germany.

Ward Bros. imported A.N.A. sewing machines from the early 1900’s. At the Melbourne Exhibition of 1902 the Ward Bros. exhibition, a combined effort from George and Samuel Ward of North Melbourne, and David Ward from Collingwood, was awarded a prize for its display of A.N.A. sewing machines, making them very popular. (http://victoriancollections.net.au/items/5216073119403a17c4ba14f5)

Apparently the spelling of ‘doilys’ as ‘d’Oyleys‘ (above) is not a spelling error; it was common usage at the time. The word is derived from the name of Robery D’Oyley, one of the followers of William the Norman.  He received a grant of valuable lands on the condition of a yearly tender of tablecloths of the value of three shillings on the feast of St Michael.  Agreeably to the fashions of the time the ladies of the D’Oyley household were accustom to embroidery and ornament the quit-rent tablecloths; hence these cloths becoming curiosities and accumulating in the course of years, were at length brought into use as napkins at the royal table and called ‘doyleys’.