Note: This page is under development – to be completed soon.

The story of the journey of my great, great, great grandfather John Fraser and his wife Mary Kempt to New Zealand is probably the most amazing of any in my family. John Fraser and Mary Kempt were Scots who I presume were born in Scotland and found their way to Nova Scotia during the “Highland Clearances” (I have yet to find details /evidence of their early lives).

John Fraser emigrated from Boularderie Island Nova Scotia with Mary Kempt on the Barque Ellen Lewis in 1859. The trip was organised and inspired by their pastor, Norman McLeod whose incredible story follows….

Arrival Of The Ellen Lewis

The long-looked-for barque Ellen Lewis, Captain Ross, which was signalled on Wednesday last came into the harbour yesterday morning after a protracted passage from Cape Breton, of one hundred and sixty-two days. She took her departure from Nova Scotia on the 1st of December and on the 3rd january picked up a good north-east trade in latitude 25 deg. 33 min., which she carried to 6 deg. north, passing to the westward of the Cape de Verdes, without sighting them, the Canaries, or any of the neighbouring islands. Crossed the equator in longitude 24 deg. 26 min., west on the 18th of January…..

Arrived at Table Bay, Cape of Good Hope, on the 3rd of March and remained during the next seven days. Sighted Cape Maria, Van Diemen on the 7th, and thence encountered baffling winds up the coast. The ship has been exceedingly healthy, four births having occurred and but three deaths, those of young children. She has brought two hundred and thirty five souls all told, and of the stamp, of which true and successful colonists are compounded. With them the croakers and ‘Job’s comforters’ will be able to exercise but little influence for evil, whilst their countrymen who have so energetically settled down before them need but to point to the results of their own industry as the best and most unanswerable demonstrations of the field afforded by New Zealand to those resolved to make their way in it. The Ellen Lewis was built at Sydney on Cape Breton in 1855, and was classed A1 for six years in French Lloyds. (The New Zealander May 12th 1860) 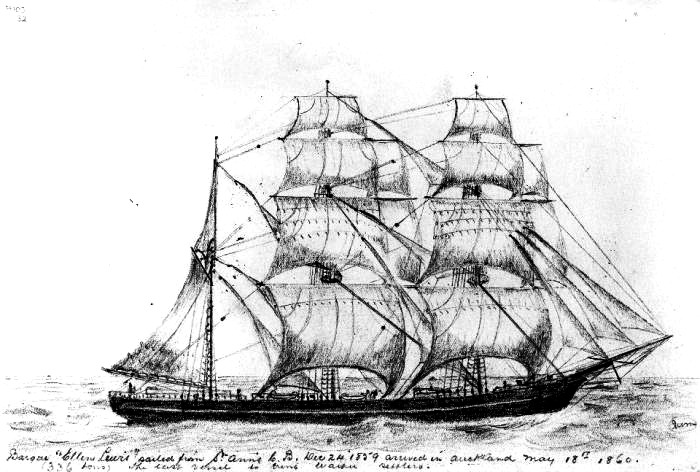 Voyage Of The Ellen Lewis

By John McLeod a passenger on the Ellen Lewis

The only ship I am able to describe clearly is the last, called the Ellen Lewis, by which I was a passenger to New Zealand. She was a barque of 336 tons belonging to William Ross, afterward the Hon. Wm. Ross.

A number of settlers called on him to find out his terms to convey them to New Zealand. His terms were £16 for every passenger – each to provide his own provisions. All being fairly well to do, they agreed to his terms. It was considered that she could carry 200 men, women and children.

She sailed from St Ann’s Harbour on December 17th, 1859, and called at Capetown for water and other necessaries. She anchored about a mile from shore, as it is an open roadstead. We stayed seven or eight days, and fortunately the wind was blowing from the land…..from Capetown we made straight for the city of Auckland, where we arrived on May 14th, 1860.

Many of the passengers settled at Waipu. They were steadfast believers in a Supreme Being guiding their destiny.

European settlement in the Waipu district had its origin in an organised migration of some 900 Scots Highlanders from Nova Scotia under the leadership of Rev. Norman McLeod. Between 1851 and 1859 six ships brought the migrants from Nova Scotia to New Zealand to take up free grants of 40 acres as fare-paying settlers.

As isolated now as it was in colonial times, Waikopou Bay has a history made colourful by the international origin of its inhabitants. Securely remote behind a narrow sea frontage and steep hillside, Waikopou has at times sheltered farmers from Nova Scotia, aristocrats from Czarist Russia, a corn merchant from Dunedin, and an English colonel.

The first to arrive were John and Mary Fraser (parents of Catherine Migan (nee Fraser) and their four daughters (actually 5 girls and 1 boy), one of those intrepid Scottish families who came to New Zealand via Nova Scotia. Paying £16 each and taking aboard enough of their own food for the voyage, the Frasers had sailed from Cape Breton on the barque Ellen Lewis in December 1859, reaching Auckland five months later. While many other emigrants on the same vessel settled at Waipu where their descendants live today, James Fraser took up land on Waiheke where he was named as original grantee of Blocks 22 to 26.

Accustomed to hard work in Nova Scotia, he cut bush and manuka for an immediate income on his inland valley property before clearing and grassing land at Waikopou. His seaside home became a magnet for fishermen and sailors passing through the Waiheke Passage, keen to barter their freshly caught mullet in exchange for equally fresh homemade butter. The butter was made by the Fraser girls; Maggie, Lena, Mary and Lexie, whose workload increased as their parents aged. They pulled scrub, milked the cows, made the butter, cared for the farm animals, tended the orchard and gardens and still found the time to indulge their love of reading.

John Fraser took a lively interest in the school committee and Maggie was an early pupil at the school in the Te Matuku valley. It was a long walk for her, over part of Days’ farm with a stiff climb up a ridge which was known locally as “Maggie Fraser’s”. Rev Gould, the Anglican minister, visiting them in 1881, referred to them as “old settlers”.

The little farm with its cows and a few sheep supplied most of their needs, variety in diet supplemented by succulent rock oysters, mussels, flounder, snapper and mullet. The family’s income was dedicated to its survival with nothing left over for luxuries, as is evident from the story about the time when the sisters needed new suits for their annual trip into Auckland. They came up with a plan to make the money they needed by selling flowers. There was no demand for the wallflowers, lavender and violets which grew in scented borders around their cottage so they decided to grow daffodils. The bulbs were bought and planted and, the following spring, yielded their first crop of blooms which were carefully packed and despatched on a steamer to Auckland. It was to take more than one season before they had enough to choose their new costumes from an Auckland store. Well-dressed women at last! Over the years, the parents followed by their daughters Lena, Mary who had married Charles Ashwin of Awaawaroa Valley, and Lexie were laid to rest in the little pioneer cemetery in Te Matuku Valley. Maggie, a gracious, gentle woman, lived on alone in the old house. Once a year she would walk over her ridge to weed the family plot with its iron fence, calling in on the Ted Day family for a cup of tea in the homestead on Jones Point. After she died in Auckland the Fraser property was sold to one of the Wilsons who owned the Martin Day block.

John and Mary were buried at Te Matuku Pioneer Cemetery, Waiheke (Oblong plot with iron fence but no stone. Mr and Mrs John Fraser and daughters Lena, Mary and Lexie – The Frasers lived at Waikopou near Man of­ War Bay)

The 6 ‘Normanite’ boats which sailed from Nova Scotia are: