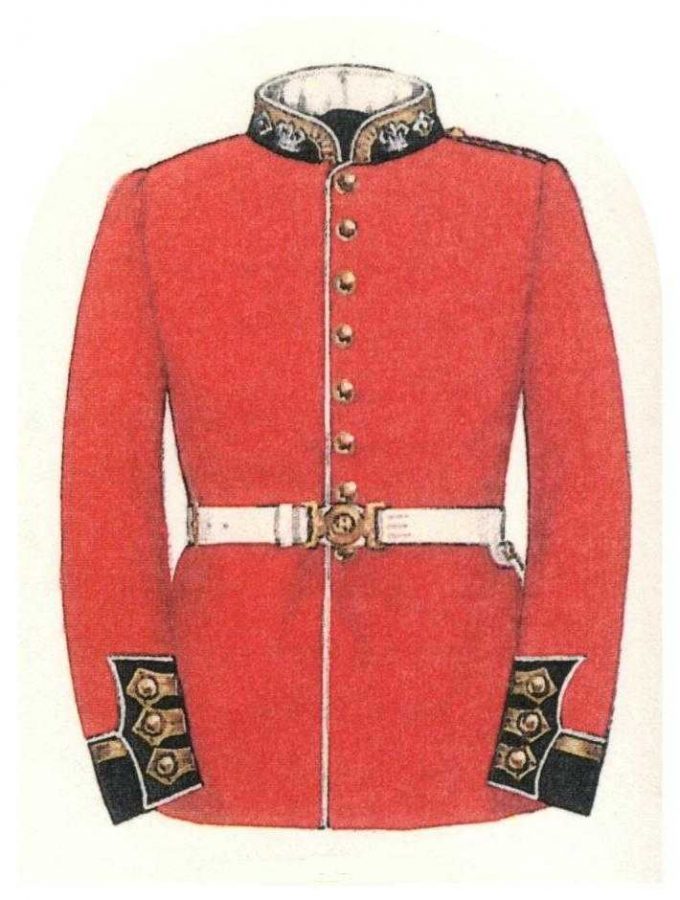 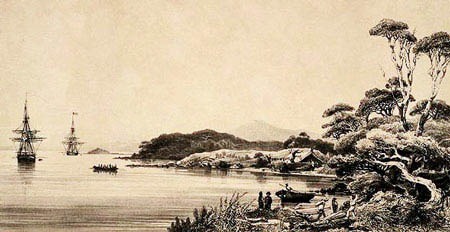 My maternal great, great grandfather Peter Migan was born in Dublin, Ireland circa 1819. He was a gardener at age 23 when he enlisted in the 58th Rutlandshire Regiment of the British Army (regimental number 1844). With a section of this regiment, who were known as the ‘Black Cuffs’, Peter departed London on 29 August 1844 on board the convict transport ship ‘Sir Robert Peel’ bound for Sydney, Australia. The ‘Sir Robert Peel’ arrived in Sydney on 18 January 1845. Two and a half years later when further reinforcements were required in New Zealand because of Maori ‘unrest’, sections of the 58th regiment were sent to Auckland, where they were based at Albert Barracks. Peter departed Sydney onboard the ‘Thomas Lowry’ on 9 September 1847 arriving in Auckland (via Hobart) on 22 September 1847.

The last detachment of the 58th Regiment, consisting of Captains G. P. Hume and C. Dressing, Paymaster Timbrell, Ensign Tighe, eleven sergeants, ten corporals, three drummers, and one hundred and seventy rank and file, will embark on board the ‘Thomas Lowry’, for Auckland, during the present week. (The Sydney Morning Herald, Monday 6 September 1847  http://nla.gov.au/nla.news-page1515103).

It is not known to me where Private Migan then served with the 58th. The most recent conflict involving the 58th. was with the maori under chiefs Mamuku and Te Oro at St.John’s Wood, Wanganui. This conflict had finished in August, 1847 with the maori retreating but promising to resume hostilities in better weather come Summer. 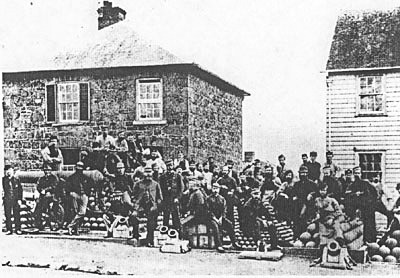 Private Peter Migan earned a ‘free’ discharge from the 58th regiment on 31 August 1853, decided to settle in New Zealand and eventually took up residence on Waiheke Island. The first hard evidence of Europeans setting foot on the Island was in 1801 when a logging ship from the Coromandel “The Royal Admiral” mapped the Northern Shore. Around about this time the Island became known as Waiheke, meaning, “cascading waters”. It is possible that the name arose through confusion when early Europeans mistook the name of a stream on one of the beaches to be the name of the entire Island. The first well recorded visit to Waiheke was that of the Rev. Samuel Marsden in 1820, he recorded that Waiheke was “as large as the Isle of Wight and contained much good land”. However it was wood rather than land which enticed the first Europeans. Waiheke was thickly forested and loggers were attracted by the abundance of timber trees, especially the great Kauri used for shipbuilding and building houses. The Kauri trade was highly lucrative, however by 1850 it was all but over; the trees were logged to near extinction and only a few small strands survived. Meanwhile the increasing deforestation of the Island began as other trees were rapidly felled for house foundations, fence posts and firewood. There was also considerable mining activity, but the riches that had been uncovered at the Coromandel Peninsula were not repeated here. 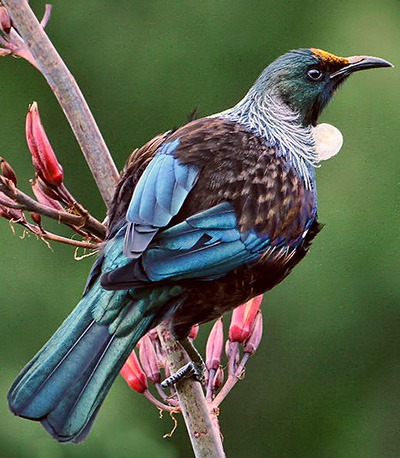 The first land purchase by Europeans was in 1838 by Thomas Maxwell who bought land on the East Coast, adjoining Man’ O’War bay. By 1845 the number of pioneering European settlers had reached 45. Farming developed and clearing of the bush continued as land purchases and settlements increased. Peter married Catherine Fraser on 16 Feb 1859. Catherine was born in Cape Breton and, with her parents John Fraser and Mary Kempt, had emigrated to New Zealand from Boularderie Island, Nova Scotia in 1859 on board the barque ‘Ellen Lewis’ with Scottish followers of the Rev. Norman McLeod. Most of McLeod’s families settled at Waipu but the Frasers went to Waiheke Island instead and settled at Waikopou Bay. Peter Migan and his family lived at Jones Point at the head of Te Matuku Bay, the site of the first European settlement on Waiheke. Te Matuku Bay was important to Maori both as a rich source of food and a place to land ‘waka’ (canoes), servicing nearby settlements, including a hilltop ‘kainga’ at Mt. Maunganui, Waiheke’s highest point.  Some details of the Migan’s life in the Te Matuku Bay district are recorded in Dixie Day’s book ‘Waiheke Pioneers‘:

“Like other pioneer families in the area, Peter cut firewood for a living and also worked at the manganese mine to help support his family of 13 children, some of whom were among the first pupils at the valley school. Peter and Catherine’s children, in birth order, were: William Henry, George, Richard Arthur, Margaret, Jack, Kathleen (Kate), John, Isabel, Mary, James, Alfred, Lillian and Alexander George (my great grandfather). The Migans were known for their tame tuis and pigeons. Using muzzle loader guns, with small charge powder and pieces of supplejack in place of shot they stunned the birds for capture and taming. Jack, was very strong and was never beaten in the local boxing matches which were held on the landing at the head of Awaawaroa Bay. The purse was often three sovereigns; a lot of money in those days.  Another son was appointed oyster inspector and regularly sailed a ketch around the Gulf. Stories of nineteenth century Waiheke recall two Migan girls walking over the hills to Ostend in the 1890s to attend a wool shed dance”. 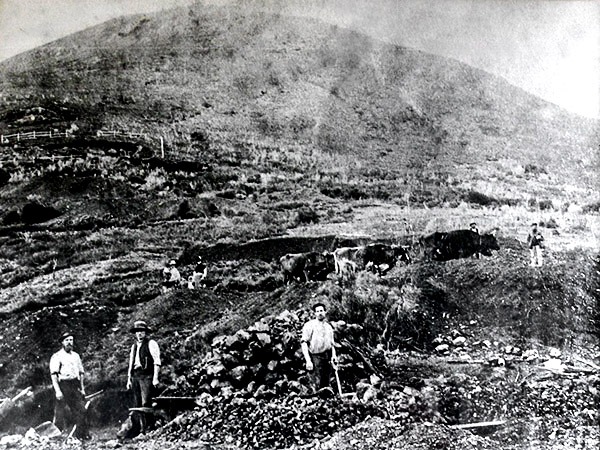 Despite the valley having the largest manganese mine in New Zealand, it was not a profitable business. From 1873 to 1875, over 1,000 tons were extracted and exported at £4 per ton. It was shipped to London as an essential ingredient in the process of steel making. An old saying “Manganese; the Waiheke disease” was most likely in reference to a syndrome that is caused by prolonged inhalation of manganese dust and fumes.Peter and his father-in-law, John Fraser, were involved in establishing the local Waiheke Public school in 1883: 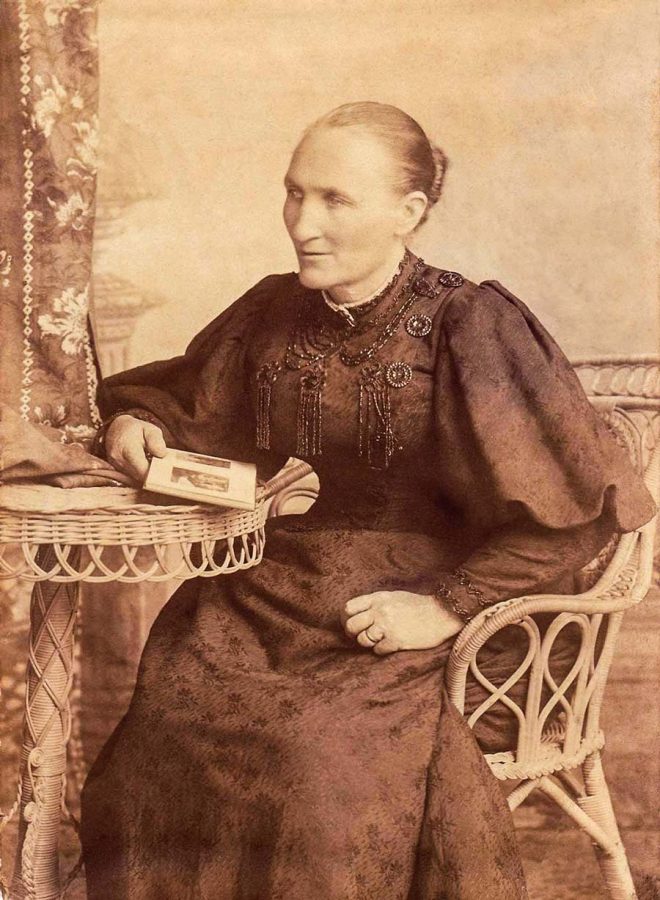 This important event in the annals of Waiheke history took place on Friday evening, the 9th February. Several friends from Auckland were present. The school is picturesquely situated at the head of McLeod’s Bay (Te Matuku) and is a well-finished and very comfortable little building. Mr. Fraser is the chairman of the school committee, and Mr. McIntosh the secretary. At about seven o’clock in the evening, there was a very large assemblage of the inhabitants. The children mustered in great force. After tea, cakes, fruit, and lollies had been partaken of ad lib, Mr. V. F. Buckland shortly addressed the meeting, and declared the school duly open.  At about 8.30 p.m. the tables were cleared away, and dancing commenced, to the energetic strains of Blind Bob’s fiddle. The dancers heartily enjoyed themselves, and the sun was shining on the hills as the various parties wended their ways homeward. At about midnight, a supper was partaken of and several young ladies and gentlemen favoured the company to a little singing. Too much praise cannot be given to Mr. Peter Migan, who acted as head cook. Mr. Mcintosh ably carried out the business of M.C.  Mr. Buckland kindly presented a small sum to the school committee to be expended in books and prizes for the children. The National Anthem concluded a most enjoyable night’s entertainment  (New Zealand Herald, 14 February 1883)

Peter Migan’s death certificate states he died of ‘debility and albuminuria’ on 9 September 1886 aged 67. He was the first person interred at the new cemetery in Te Matuku Valley. A poignant article in the New Zealand Herald (9 Sept 1886) describes some of his last hours:

“An old man named Migan was brought up from the island of Waiheke, by the steamer Coromandel, in order to his being medically treated at the Hospital. On the steamers arrival, one of the passengers who took an interest in the case, got a cab and had Migan conveyed to the Hospital, as through feebleness and indisposition he was unable to stand or walk. Migan is 65 years of age, and has a large family at Waiheke, but he has been latterly in straitened circumstances”

Catherine Migan lived long enough to see five of her sons enlist to fight in the First World War but she died in 1916 and is also buried at the Pioneer Cemetery alongside her daughter, Kate, wife of Thomas Bowden. 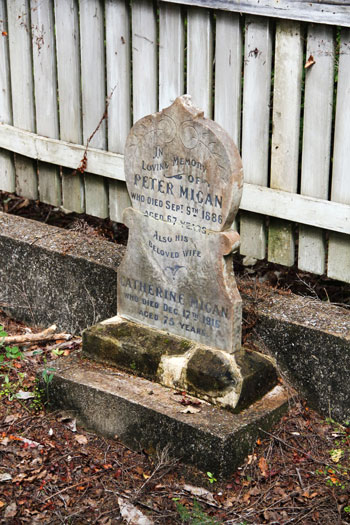 Peter and Catherine’s headstone at the Te Matuku Pioneer Cemetery. 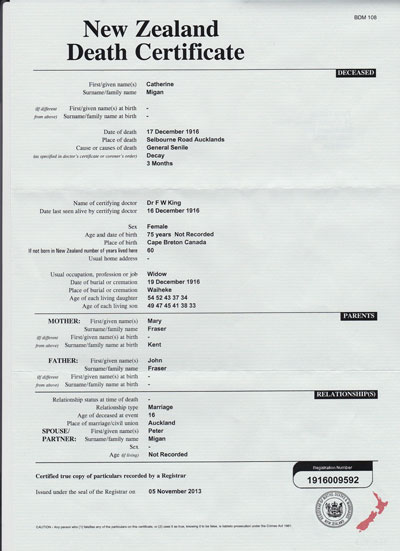 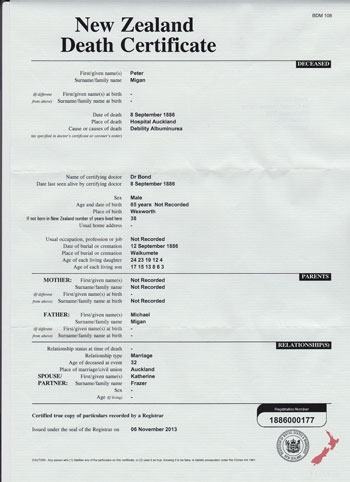 The last detachment of the 58th Regiment, consisting of Captains G. P. Hume and C.Dressing, Paymaster Timbrell, Ensign Tighe,  eleven sergeants, ten corporals, three drummers, and one hundred and seventy rank and file, will embark on board the ‘Thomas Lowry’, for Auckland, during the present week. (The Sydney Morning Herald, Monday 6 September 1847)

Rank (as at discharge):  Private