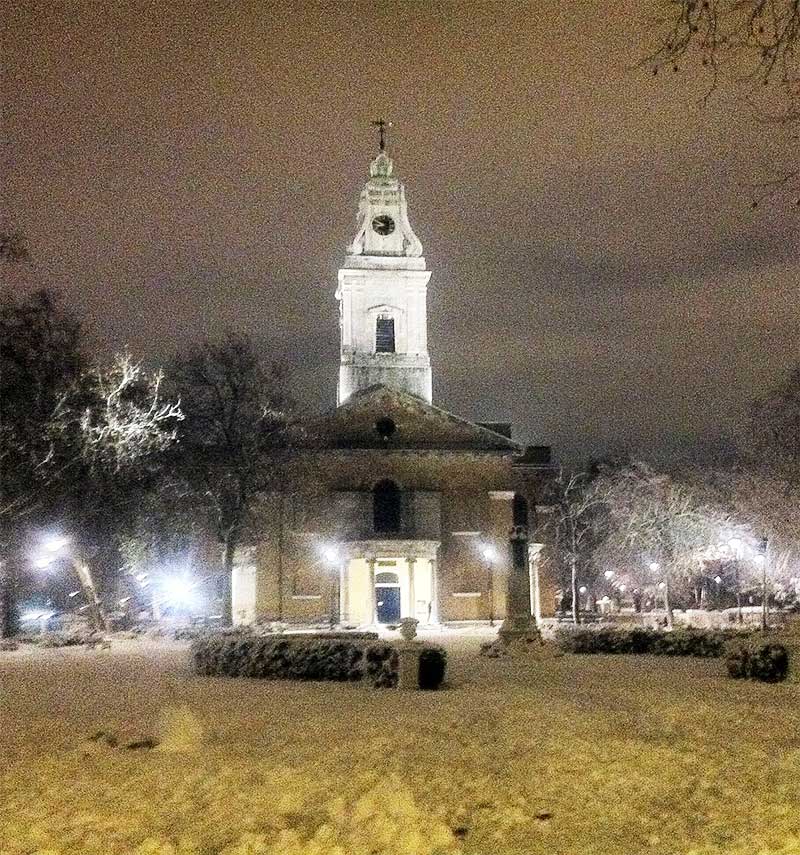 My maternal great, great, great grandfather, Samuel Judd, was born 5 April, 1800 in Hackney, County of Middlesex, London, England. On 15 Nov 1836, Samuel married Elizabeth Langridge at St. John of Jerusalem church in Hackney. This was the same church in which his father John and mother Rebecca had been baptised. They were a strongly religious family and I suspect it was the promise of a better life and Caroline Chisholm’s humane spirit, rather than the recent news of the gold rush which tempted Samuel and Elizabeth, with their 6 young sons, to emigrate to the new colony of Victoria, Port Phillip, Australia in 1852. In January 1852 Samuel, along with 2500 others, attended a public meeting of Caroline Chisholm’s ‘Family Colonisation Loan Society’ at the Royal British Institution, Tabernacle Row. Founded by Caroline Chisholm as a pilot scheme to demonstrate her ideals, the Family Colonisation Scheme fostered and made possible the emigration of complete families, who, departing voluntarily, were well equipped for the voyage, optimistic for the future and guaranteed the necessary information on arrival. 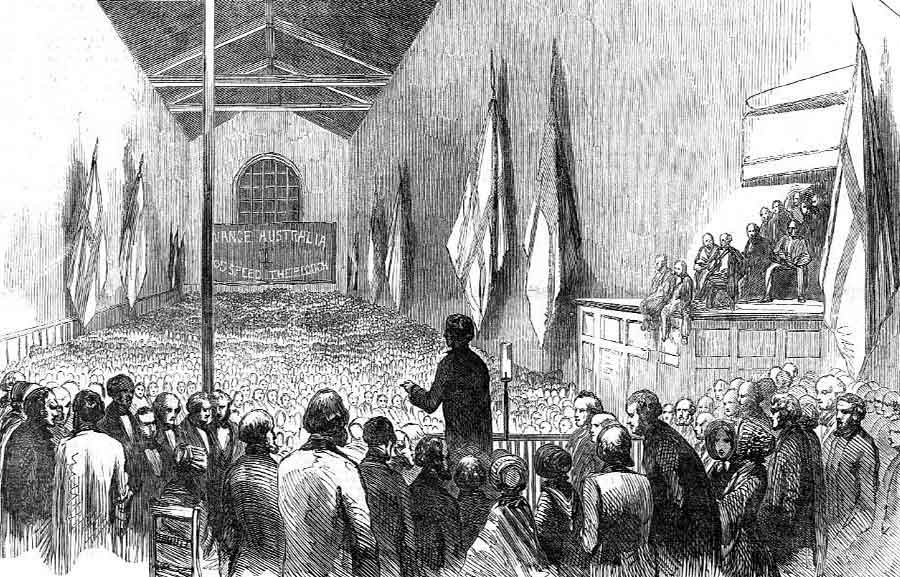 The crowded meeting attended by Samuel Judd, hosted by Caroline Chisholm and chaired by the Earl of Shaftesbury, was for those emigrants about to proceed to Australia on the ship ‘The Mariner’. The Society had already successfully sent 3 other vessels (The Slains Castle, The Blundell and The Athenian) with approximately 600 emigrants to the colony in the previous 2 years. Emigrants paid at least two thirds of their fare with the remainder being loaned to them by the Society and repaid within two years of arrival in Australia.  It was proposed at this meeting that to save emigrants the significant initial cost of house rent in Melbourne, their subscriptions also provide them with tents for use on their arrival. This model emigration system, as the Earl suggested at the meeting

“…encouraged honest thrift and moral conduct. It prompted the working man to show that by a good character he could obtain assistance to compass that which he had at heart. It was a good moral training for men to pass the seas and to be removed in a great measure from the influence of those measures whereby he might be coerced into repayment”.

The noble lord concluded by expressing his hope that the emigrants who were about to proceed to Australia by the  Mariner would continue to regard the honour and interest of the mother country as well as of the colony; and by declaring his faith that even if these colonies should ultimately separate from the mother country they would still be allies and supports of the land from which they sprung.

Other speakers described the incredible demand for labour in the colony, stated that accounts of the gold diggings had not been exaggerated and warned the emigrants to be “particularly careful in regard to the character of those to whom they engaged themselves” in the colony. (A full report of the meeting can be read HERE) 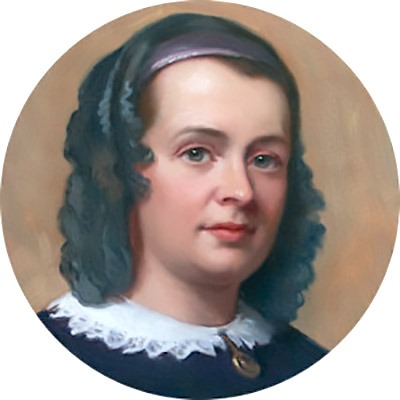 Caroline Chisholm: “Drying up one tear has more of honest fame, than shedding seas of gore.”

In her memoirs Caroline Chisholm details aspects of the voyage of The Mariner which set sail on 2 March 1852. Emigrants expected a journey of 16 weeks, provided their own bedding and were provided with 15 cubic feet of storage space. The weekly dietary allowance for each adult included: 3lbs. biscuit, 2 1/2lbs. meat, 3 1/2lbs. flour, 1/2lb. carrots and preserved potatoes and 5 gallons water. Emigrants signed on in groups of 12 and committed to taking care of young, ‘friendless’, single females. Rules for the voyage included handing in firearms and gunpowder to the captain, no smoking on the poop or lower deck, no gambling, lamps extinguished at 10pm, bedding to be aired on deck twice a week and washing was to be completed by 8am. In terms of recreation …“arrangements will be made for amusements; and parents of mature age are requested, for the sake of the young, to be present on such occasions, so that there may be mirth without danger and amusement without remorse”. The ships were very well organised and provisioned. Prior to a previous journey, the surgeon K.Bowie, knowing full well the ravages of cholera had…

“fitted up two perforated zinc tubes extending from the stem to the stern of the vessel, and continued on to the deck, one tube was placed along the roof of the cabins, the other the floor, the first carried off the used air, the latter brought in fresh, and such was the excellence of this plan that all the effluvia from the close congregation of so many people and from the large quantity of cooked meat was completely drawn away as it arose, while at the equator, between decks, the temperature was two degrees less than under the poop. He also had a simple contrivance for distilling sea-water, which extra supply was distributed for sanitary measures. These contrivances being found so valuable, efficient, and even economical, they now form a portion of the arrangements in the Society’s vessels. Economical, certainly, for they save the “medical stores”, and instead of the vessel arriving with a number of emigrants worn out with sickness, their constitutions injured, and requiring months to recover a tone of health that they may be able to labour, they find themselves capable of entering on active employment the instant they land, as has been practically proved for there was not one un-engaged the second day after the arrival of the Blundell”.

The information provided to each emigrant included the following pithy advice from the ‘Committee Of Australian Colonists’ in London:

“A working farmer, or a market gardener, may readily earn a comfortable living by renting or purchasing land within a convenient distance of a town”. “A man who can handle tools in a rough useful manner, drive a team, fell, dig, and plough, and understands cattle, will do best of all. The working man who knows only how to work will make a good shepherd”. “There is a steady demand and high wages for female domestic servants and for stout country girls, accustomed to daily and country work. All these can, if they please, marry respectably”. “The discovery of gold has so much disturbed and raised the rate of wages that it is difficult to state an average”. “Letters of introduction are generally useless, unless accompanied by letters of credit”. “Outfit etc; As little baggage, and as much money as possible”.

The Mariner arrived safely in Port Phillip on 2 July 1852. I can only wonder at the trepidation and excitement Samuel and Elizabeth Judd must have felt as they disembarked at Hobson’s Bay with their six boys; Samuel Jr (aged 15), Robert William (13), William (9), Richard Langridge (8), James (6) and David (2). The Port Phillip district had only been separated from the colony of NSW for less than a year, had been decimated the previous year by the ‘Black Thursday’ bush fires and was currently in the grip of gold rush fever. I presume the Family Colonisation Loan Society pitched their administrative tent somewhere in a respectable corner of ‘Canvas Town’ (South Melbourne) as it was then known while the emigrants pitched theirs praying determinedly and wondering what on earth they had come to. I have no other information but an unconfirmed report that Samuel and his family spent the next couple of years at Moonee Ponds. 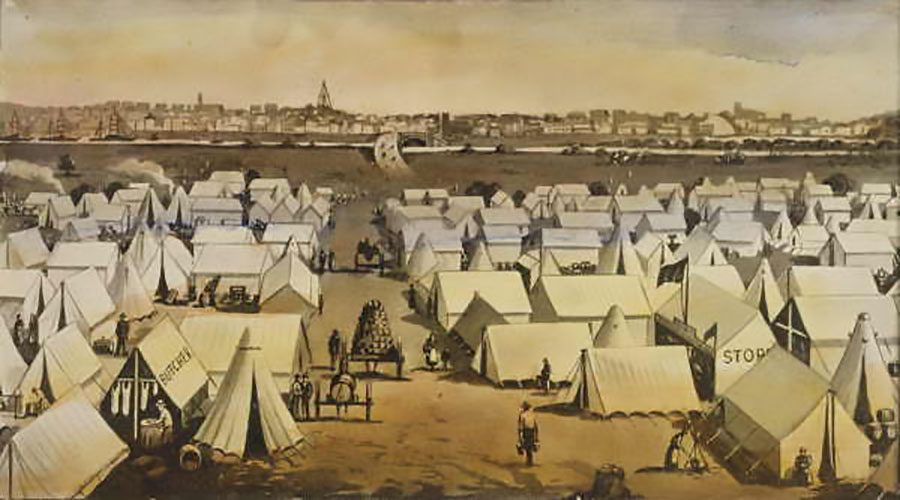 On the formation of the new colony of Victoria leases over thousands of acres held by squatters were withdrawn. The land was surveyed, divided into ‘Portions’ and offered for sale at Government Land Sales. These land sales were ‘proclaimed’ by His Excellency C.J. La Trobe, Esq., Lieutenant Governor of the Colony of Victoria and its dependencies under a ‘certain act of the Imperial Parliament of Great Britain and Ireland  ….An act for regulating the sale of waste lands belonging to the Crown in the Australian Colonies’.

In May, 1852, real estate raconteur, Josiah Holloway paid £938-11-9  at a Government Land Sale for 625 acres in a relatively undeveloped area known as the Parish Of Moorabbin.  This area lay about 12 miles south east of the town of Melbourne. Holloway subdivided the area into 370 allotments and advertised it in the ‘Argus’ newspaper as “Two Acre Village”. Lots initially sold for £20 and while many were sold to land speculators, some lots were purchased by families intending to settle and earn their livelihoods from the land. A small hotel named the ‘Cheltenham Inn’ had been built in the area and was named after the English home town of it’s builder, Mr Whorrall. By 1856, the Two Acre Village area was known as Cheltenham. In addition to purchasing land at government auctions Josiah Holloway was also buying land from other crown grantees. William Mitchell had purchased 231 acres; Portion 51 in the Parish Of Moorabbin at public auction in 1851 for £473-11-0.

In August 1852 he sold this to Holloway for £1386 making a handsome profit. Holloway sub-divided this land, calling it the ‘Beaumaris Estate’ and immediately put it on the market. Holloway’s advertisement in the Argus stated that the sale was ‘giving an opportunity of profitable investment rarely to be met with’. Holloway was so confident a railway would be built to the area that he had thought of naming it ‘Station Town’ but the surveyor, Mr. Penrose Nevis Esq. had suggested the name Beaumaris ‘as being particularly applicable to the spot, on account of its enchanting position and its striking resemblance to that most delightful watering place’. The land was said to be ‘well adapted for agricultural purposes (possessing a soil of surpassing richness) is enhanced most materially in value by the abundance of fresh water on the estate’. 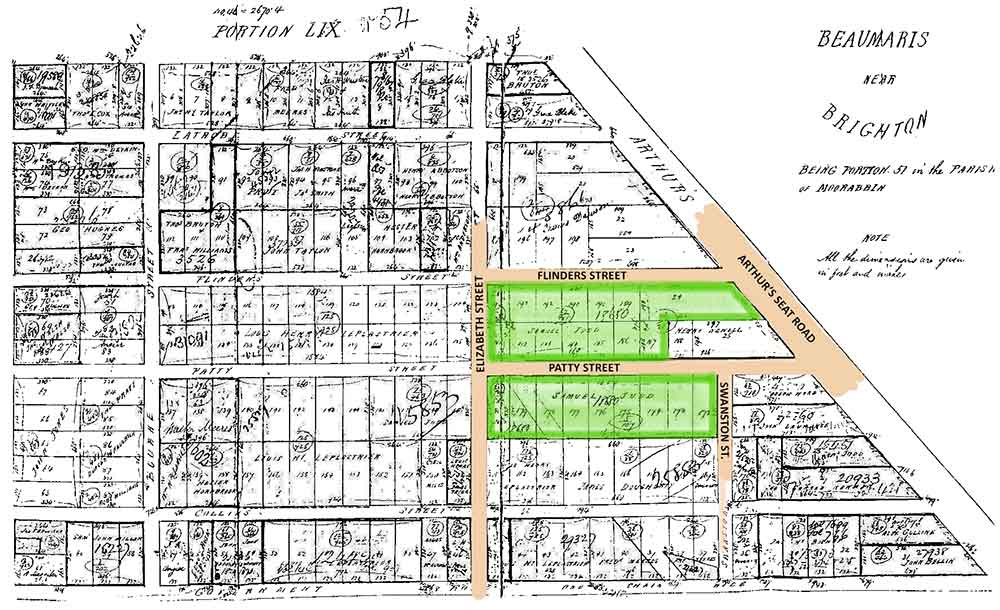 Despite his age of 53 years and having 6 young boys to contend with, Samuel and Elizabeth somehow set about turning this land into a viable market garden. No doubt there would have been mutual assistance with other neighbouring pioneer families from the Beaumaris, Gipsy and Two Acre Village estates. It must be noted that roads in the area at the time were dirt tracks and the railway extended only as far as Brighton. Coaches left from the ‘Bull and Mouth’ in Bourke Street, for the Brighton Hotel daily. In 1853 pioneer citizens from Moorabbin, Sandringham and Mordialloc, including Samuel Judd, petitioned for the establishment of a post office in Moorabbin. A Post Office was eventually established in the district in 1857.

Some of Samuel and Elizabeth’s boys married into other local families: Richard Langridge (my great, great grandfather) married Margaret Ann Brough in 1869, James married Emma LePage in 1873 and following Emma’s death then married Elizabeth Jane Dear. Other sons married interstate or overseas; William married Esther Evans in South Australia in 1872 while Samuel Jr. moved to New Zealand and remarried there after his first wife died. The Judd’s named their Cheltenham home ‘Poplar Grove’ and were strongly involved in the Church of Christ and the local Temperance Society.

Samuel died in 1883 and his wife Elizabeth followed him to the grave in 1887.

They were both buried at the Cheltenham cemetery. The lives of their children and grand children will be explored in another page on this website titled: ‘The Judd Boys’. 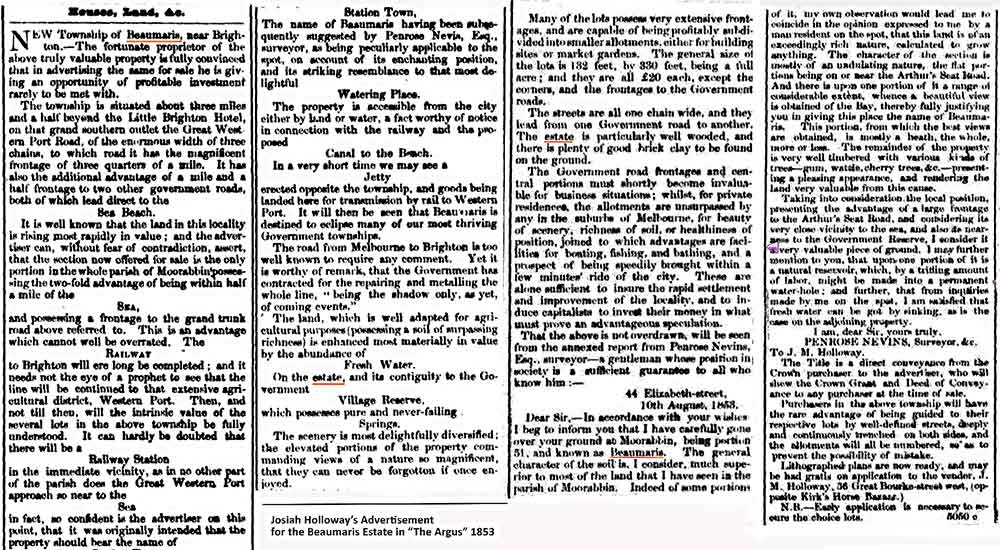 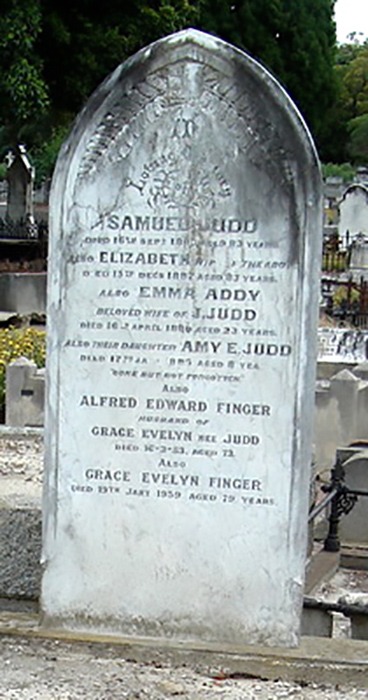 Headstone of Samuel and Elizabeth Judd in Cheltenham Cemetery