Three boys, a youth, an infant and an adult were the human elements in an episode which nearly ended tragically at Prince’s Park on Saturday morning. The three boys were strolling through the park guessing as to the age of a swan on the lake when they were joined by the adult. Suddenly one of the boys, Walter Freeman of Barkly street, noticed something float out from under the bridge at the southern end of the lake. From the distance it looked like a couple of tiny goslings. They started out to get a closer inspection and as they approached the spot, they found that the objects they first took to be goslings were the tiny hands of a baby fluttering in a futile attempt to keep itself afloat. By this time the infant was about 20 yards out from the bank, and in the words of one of the boys,

looked for all the world like a wax doll. 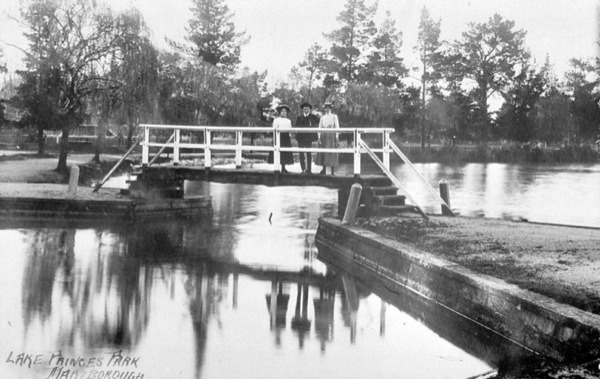 The only sign of life by this time was the fact that water sometimes spurted from the infant’s mouth. The boys almost crying by this time naturally appealed to the adult who had joined them a little earlier.

Then (and is it not almost incredible?) the person refused.

Again the boys appealed but without success. Not being swimmers themselves, they were about to set off to the nearest house for assistance when fortune sent them help in the person of Cyril R. Fisher a youth of 18 years. Fisher, who is employed as a ‘caller up’ on the railways, was on his way to perform his duties and entered the park by the Napier street gates. He was no sooner in sight than he was hailed by the boys. Not considering that anything was wrong, he walked leisurely across until the lads called on him to hurry. He lost no time in getting to the spot and seeing the infant, he, without a moment’s hesitation, jumped in and started to wade out.

Fisher was unable to swim but, although the water came up over his shoulders, he secured the baby and brought it to the shore. And here again the unnatural indifference of the adult came into evidence.

Fisher said to the person on the bank.

Young Freeman at once took the infant and laid it on the bank. As soon as the rescuer had scrambled out efforts at resuscitation were immediately commenced and one of the boys was despatched for Dr. Greene. In a few minutes the doctor arrived and saw that the little one was breathing. Immediately wrapping his coat round the baby, he hurried to the hospital, where the work of resuscitation was carried on. The baby is Harry Higgins, the two year old son of Mr. Arthur Higgins, of Taylor street. He had wandered away from his home. He is now in the Maryborough Hospital, and is entirely recovered. The little fellow owes his life to the promptitude with which his rescuer acted. As for the person who stood and watched – well, it will be noticed that we have carefully and purposely refrained from referring to him as a man.

Walter Alexander Freeman was my maternal grandmother’s brother. He was aged 12 at the time of the above incident. Later in life he was a distinguished athlete, sportsman and, like his father before him, a bee-keeper. He was appointed by the Department of Agriculture as the Apiaties Inspector for the Western Sector of Victoria. More stories about the Freeman’s and bees later….