Homin’ in on Serotonin

(Note: It’s always interesting to me to find out what thinking was around new discoveries and where the train of thought ultimately led to. The newspaper articles below are both from 1954).

By our science writer 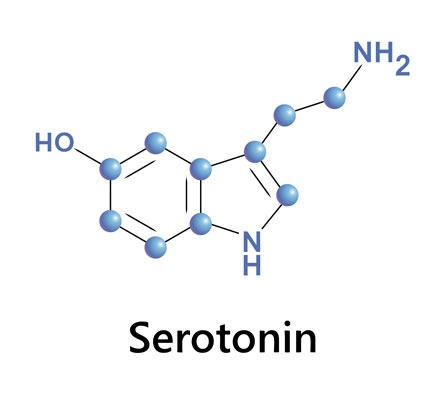 It was in 1942 that Drs. Reid and Bick, of the Hall Research Institute, Melbourne, studied the puzzling blood substance called serotonin. They found that this substance is produced by “blood platelets”, tiny objects found in all blood. Platelets supply essential materials for clotting.

Reid and Bick found, however, that serotonin plays no part in producing clots. It “tones up” or constricts the walls of big blood vessels and arteries. The Australians thought this might help in checking bleeding.

Later, Dr. Reid, with physiologist Rand, of Melbourne University, extracted serotonin in a partly-purified state. American scientists then prepared the pure substance. It proved to be a powerful constrictor of arteries, but since there are only a few grains of serotonin in two tons of blood, its function in the human body became a scientific puzzle. 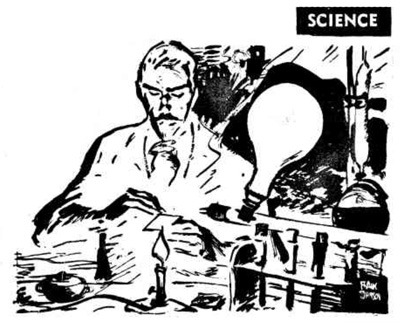 Here, D. W. Woolley and E. Shaw, of the Rockefeller Institute of Medical Research, stepped in. Woolley, a biochemist, saw a clue in those “few grains-to-a-ton”.

Powerful agents, such as hormones or vitamins, which control functions of the human body, achieve their effects through similar microscopic amounts. For instance, thyroxin, the hormone produced by the thyroid gland, poured into the circulations at the rate of only one two-hundredth of a grain a day. Yet, on this tiny amount, depends every citizen’s health, the pace at which his heart works, and his mentality. Total lack of thyroxin means idiocy.

Is serotonin a hormone? asked Woolley. If so, what does it do in the human body? He found a clue, of all places, in radio and TV programs.

Recent popular scientific talks in USA on radio and TV networks have included the queer mental effects of LSD (lysergic-acid diethylamide), a drug which produces vivid hallucinations, waking visions decked out in riotous colours and distorted shapes. In a recent radio program a human subject, given a dose of LSD described his visions as they occurred.

Woolley and Shaw studied the chemical make-up of serotonin and LSD and found they are antagonists. Serotonin checks the effect of LSD and vice-versa. Other antagonists to serotonin are harmaline, obtained from a poisonous South American plant, yohimbine (from an African tree) and medmain, a synthetic. All these produce temporary mental aberrations if given in big doses.

Since serotonin is a chemical antagonist of these, serotonin may be nature’s preservative of human sanity. Woolley and Shaw don’t exactly put it that way. They suggest that serotonin ensures that thinking, seeing, hearing and other brain functions are carried out normally without distortion or confusion.

If so, it should be a simple matter to treat “confused states”, mental diseases like schizophrenia, by injections of serotonin.

They tried this, but serotonin had no effect. Research on animals then showed them that serotonin, injected into the blood circulation, does not reach the brain. Woolley and Shaw believe they can circumvent this. They are making compounds allied to serotonin, which they hope can penetrate this mysterious barrier. They are trying also compounds in which serotonin is linked to some substance “attractive” to brain cells, hoping this will cheat these cells into accepting the compound. If this can be done, they believe serotonin may revolutionise treatment of mental disease, particularly schizophrenia.

In schizophrenia the patient’s personality gradually breaks up, or she loses interest in life, may invent senseless phrases as replied to all conversation, becomes rapt in mental fantasies, which may lead to crimes, or sink into a semi-stupor. Existing treatment is by electric shocks, inhalation of certain gases, certain brain operations. Physicians are doubtful of permanent cure in cases of genuine schizophrenia.

Woolley and Shaw consider schizophrenia is due to slow loss of some hormone, some factor necessary for the function of clear rational thinking.

Is serotonin this hormone?

Since LSD and other drugs which cause persons to withdraw into a world of fantasy and illusion, are antagonists (or substitutes) for serotonin, it looks like it. Thus, a research that began in Melbourne 12 years ago as a study of the mechanism of blood-clotting may end in a cure for schizophrenia or shattered personality, one of the greatest problems of modern civilised life.

Your sanity depends on this hormone

It’s always been in the human body but its true function has only just been pinpointed.

A HORMONE, claimed to be the major link between the human mind and reality and regarded as absolutely essential in maintaining sanity, has been traced by a group of American research scientists.

The substance is serotonin, an extremely potent body – chemical whose existence has been known for only two or three years and whose function, up to now, has been supposedly confined to regulation of blood pressure.

Serotonin, which is found in man but is obtained chiefly from the neck glands of a giant tropical toad, was described before the recent annual meeting of the US Academy of Sciences at Washington (USA), in a report by Drs. D. W. Woolley and E. W. Shaw of the Rockefeller Institute.

The tracking down of the hormone is regarded as a new victory for “atomic” research, in which radio active materials are tracked through the body.

The findings of Drs. Woolley and Shaw were based on extensive animal experiments.

Various drugs have been known for years to produce pronounced mental symptoms. Among these is the extremely potent yehimbrine which is obtained from the bark of an Argentine tree. It has limited medical use to combat spasms, but is such a powerful aphrodisiac its use is strictly controlled. In overdoses it causes symptoms quite similar to those of insanity. Similar effects result from several other alkaloids of the same family.

When discovery of serotonin was announced, the Rockefeller Institute doctors were impressed by the fact that it was chemically very similar to these alkaloids, so much so that body cells might easily mistake one for the other.

This brought the scientists to the relatively new medical field of “substitution therapy” which now plays a big role in cancer research. In this field, substances most similar chemically to amino- acids, which are necessary to build cancer cells, are administered. But these substances, instead of promoting cell growth, act as violent poisons. The cancer cells are deceived by the similarity and accept the poisons rather than the nutrients. Some scientists hold that this is now the most promising approach to cancer research.

The Rockefeller Institute doctors wondered, Dr. Woolley reported, whether the same thing – but in reverse – might not be happening in the brain, producing the forms of insanity sometimes described as “cancers of the brain”.

Their suspicions were strengthened with the recent introduction of a new synthetic drug, lysergic acid, into psychiatric research.

Relatively small amounts of lysergic acid given to a normal person produce ~ all the symptoms of the dreaded mind disease, schizophrenia. Lysergic acid is chemically so close to serotonin that brain cells easily could mistake one for the other, the doctors reasoned.

When this happened the supply of the hormone to the brain would be greatly reduced. The same thing happened when other “anti-metabolites”, similar to lysergic acid, were synthesised.

That serotonin was present in the brain in considerable amounts hitherto had not been suspected. The doctors found that large amounts were present, indicating that the hormone must have some importance in brain functioning.

They also deduced that there was no reason to believe that yehimbrine, lysergic acid or any of the other drugs would have a direct action on the brain cells.

If the new implications are supported by further experiment, Dr. Woolley said, several of the most prominent forms of insanity may be treated by injections of serotonin to restore brain balance.

Their animal experiments showed, however, that when the hormone is injected into the bloodstream it will not pass the brain cell barrier and it may therefore be necessary to synthesise some serotonin-like compound to overcome the difficulty.

Other experiments, indicated in discussions of the report give strong evidence that this new hormone may be of great significance to human health in other fields.

An abundant source of the hormone has been found in the poison glands of a Brazilian toad called bufo marinus, forming part of the venom. These glands can be “milked” and the hormone separated from the poison.

Just in case you missed the connection, the big ugly toads mentioned above – the ones with all that serotonin neck poison are…..  yep, our good old Cane Toad.

Note: Serotonin is a monoamine neurotransmitter and a hormone. Biochemically derived from tryptophan, serotonin is primarily found in the gastrointestinal tract, blood platelets, and the central nervous system of animals, including humans. It is popularly thought to be a contributor to feelings of well-being and happiness. Functions include the regulation of mood, appetite, and sleep. Serotonin also has some cognitive functions, including memory and learning.

Modulation of serotonin at nerve synapses is thought to be a major action of several classes of pharmacological antidepressants e.g. SSRIs (Selective Serotonin Re-uptake Inhibitors)