While researching old newspapers in relation to the early use of LSD on psychiatric patients in the 1960s, I stumbled across the weird 1950s CIA mind control project known as MK-ULTRA. 86 institutions including universities, mental hospitals and prisons – participated in CIA-sponsored experiments on (often unwitting) human subjects. Over eleven years, thousands of Americans were subjects of unethical and often illegal experiments to test mind control techniques, from subliminal messaging to sensory deprivation to the use of hallucinogenic drugs.

THE COLD WAR AND PROJECT MK-ULTRA

In the 1950s and 1960s – the height of the Cold War – the United States government feared that Soviet, Chinese and North Korean agents were using mind control to brainwash U.S. prisoners of war in Korea. In response, Allan Dulles, director of the Central Intelligence Agency (CIA), approved Project MK-Ultra in 1953. The covert operation aimed to develop techniques that could be used against Soviet bloc enemies to control human behavior with drugs and other psychological manipulators.

The program involved more than 150 human experiments involving psychedelic drugs, paralytics and electroshock therapy. Sometimes the test subjects knew they were participating in a study—but at other times, they had no idea, even when the hallucinogens started taking effect.

Many of the tests were conducted at universities, hospitals or prisons in the United States and Canada. Most of these took place between 1953 and 1964, but it’s not clear how many people were involved in the tests—the agency kept notoriously poor records and destroyed most MK-Ultra documents when the program was officially halted in 1973. 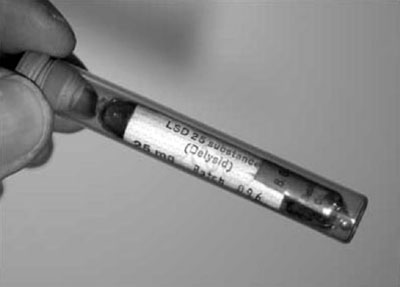 The CIA began to experiment with LSD (lysergic acid diethylamide) under the direction of agency chemist and poison expert Sidney Gottlieb. He believed the agency could harness the drug’s mind-altering properties for brainwashing or psychological torture.

Under the auspices of Project MK-Ultra, the CIA began to fund studies at Columbia University, Stanford University and other colleges on the effects of the drug. After a series of tests, the drug was deemed too unpredictable for use in counterintelligence.

The CIA dosed the men with LSD and then – while at times drinking cocktails behind a two-way mirror – watched the drug’s effects on the men’s behavior. Recording devices were installed in the prostitutes’ rooms, disguised as electrical outlets. Most of the Operation Midnight Climax experiments took place in San Francisco and Marin County, California, and in New York City. The program had little oversight and the CIA agents involved admitted that a freewheeling, party-like atmosphere prevailed.

An agent named George White wrote to Gottlieb in 1971:

Of course I was a very minor missionary, actually a heretic, but I toiled wholeheartedly in the vineyards because it was fun, fun, fun. Where else could a red-blooded American boy lie, kill and cheat, steal, deceive, rape and pillage with the sanction and blessing of the All-Highest?

THE DEATH OF FRANK OLSON

Frank Olson was a scientist who worked for the CIA. At a 1953 CIA retreat, Olson drank a cocktail that had been secretly spiked with LSD. A few days later, on November 28, 1953, Olson tumbled to his death from the window of a New York City hotel room in an alleged suicide.

The family of Frank Olson decided to have a second autopsy performed in 1994. A forensics team found injuries on the body that had likely occurred before the fall. The findings sparked conspiracy theories that Olson might have been assassinated by the CIA. After prolonged legal proceedings, Olson’s family was awarded a settlement of $750,000, and received a personal apology from President Gerald Ford and then-CIA Director William Colby. 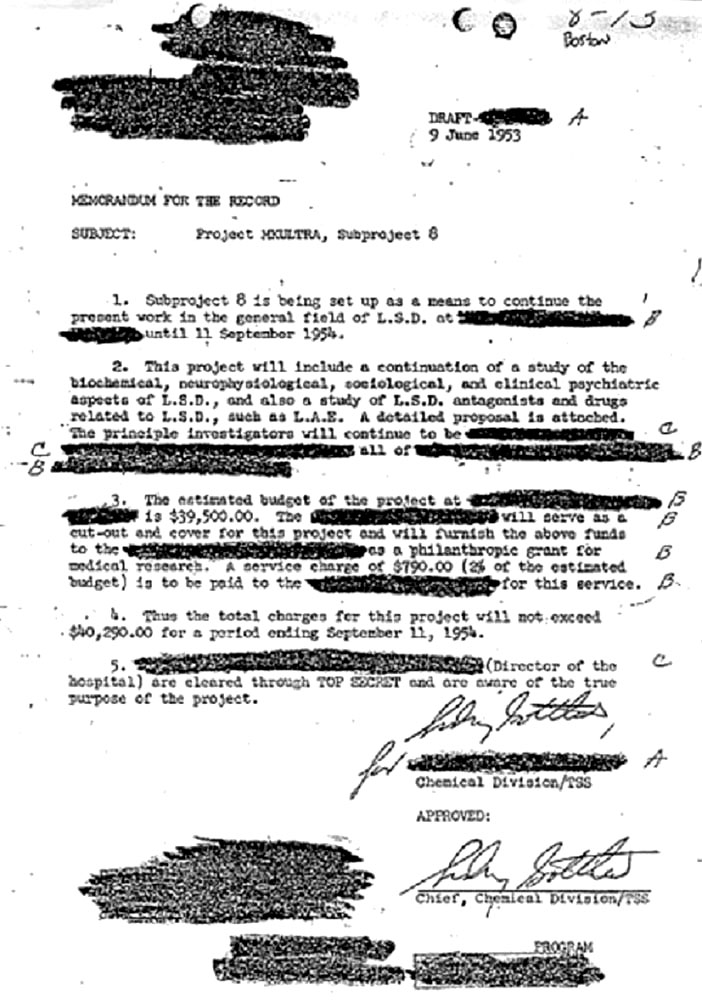 KEN KESEY AND OTHER MK-ULTRA PARTICIPANTS

Ken Kesey, author of the 1962 novel One Flew Over the Cuckoo’s Nest, volunteered for MK-Ultra experiments with LSD while he was a college student at Stanford University. Kesey later went on to promote the drug, hosting LSD-fueled parties that he called “Acid Tests.”

Acid Tests combined drug use with musical performances by bands including the Grateful Dead and psychedelic effects such as fluorescent paint and black lights. These parties influenced the early development of hippie culture and kick-started the 1960s psychedelic drug scene.

In 1974, New York Times journalist Seymour Hersh published a story about how the CIA had conducted non-consensual drug experiments and illegal spying operations on U.S. citizens. His report started the lengthy process of bringing long-suppressed details about MK-Ultra to light. The following year, President Ford—in the wake of the Watergate scandal and amid growing distrust of the U.S. government—set up the  United States President’s Commission on CIA Activities within the United States to investigate illegal CIA activities, including Project MK-Ultra and other experiments on unsuspecting citizens. The Commission was led by Vice President Nelson Rockefeller and is commonly referred to as the Rockefeller Commission.

The ‘Church’ Committee – helmed by Idaho Democratic Senator Frank Church—was a larger investigation into the abuses of the CIA, FBI and other U.S. intelligence agencies during and after the resignation of President Richard M. Nixon. The Church Committee delved into plots to assassinate foreign leaders, including Cuban dictator Fidel Castro and Congolese independence leader Patrice Lumumba. It also uncovered thousands of documents related to MK-Ultra. These revelations resulted in Ford’s 1976 Executive Order on Intelligence Activities that prohibited:

experimentation with drugs on human subjects, except with the informed consent, in writing and witnessed by a disinterested party, of each such human subject. 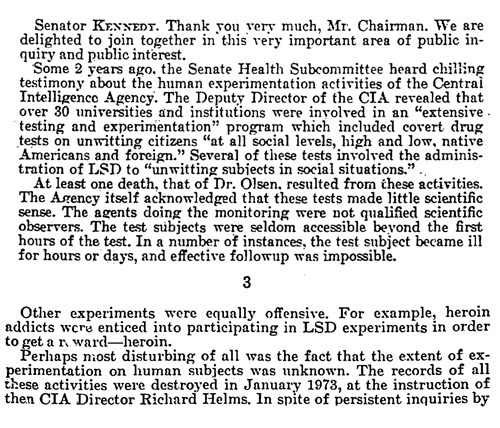 Extract from US Government Committee report re Project MK-Ultra 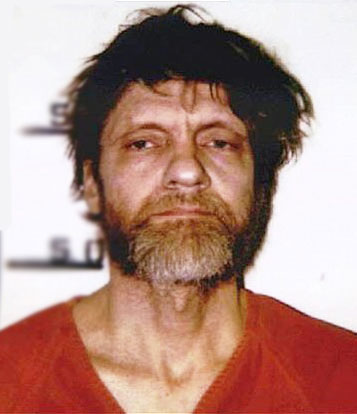 One person who was subjected to Project MK-Ultra programs, later became very well known – for all the wrong reasons.

Among the most high profile suspected victims was Ted Kaczynski, who would become infamous as the Unabomber. In his second year as a student at Harvard University, 17-year-old maths prodigy Kaczynski volunteered for a psychological study run by Dr Henry Murray, a Harvard professor who was secretly employed by the CIA. For three years, the volunteers were subjected to aggressive, traumatising sessions in which their most cherished beliefs were torn apart, as part of research into emotional responses to extreme stress under interrogation. Following the experiment, Kaczynski became increasingly withdrawn and eventually dropped out of society altogether. From a remote backwoods cabin in Montana, he developed a nihilistic, anti-capitalist, anti-technology political philosophy. Eventually, he would turn to violence to further his agenda, justifying his deadly letter bomb campaign in a rambling manifesto which, according to expert witnesses for the defence at his murder trial, showed the influences of the traumatic Harvard experiment.

WASHINGTON, Thursday (AAP). — The former chief of CIA mind-control projects alleged yesterday that there might have been an attempt by “potentially hostile” people to modify the behaviour of President Nixon’s party during a visit abroad in the early seventies, United Press International reported.

In testifying before the Senate subcommittee on health and scientific research, Dr Sidney Gottlieb spoke of “disorientation” allegedly involving the President’s physician and others in the Nixon party on a presidential visit abroad in “approximately 1971”. Mr Nixon visited China and Russia in 1972. Senator Edward Kennedy, chairman of the subcommittee, asked, “are you suggesting that the presidential party was drugged?”

“I’m suggesting we want to review whether this happened”, Dr Gottleib said.

I accept full responsibility for my own role” in the CIA’s mind-control and behaviour research. He objected to being made what he called “the apparent fall guy” for the CIA’s MK-Ultra and and other secret projects involving drugs, brainwashing and mind-control experiments — often on unwitting American citizens.

The context in which this investigation was started [in] about 1952, he said, was that of the height of the cold war, with the CIA organising its resources to liberate Eastern Europe by paramilitary means…. There was the threat of Soviet aggression, very real and tangible as exemplified by the Berlin airlift.

There was tangible evidence that both the Soviets and the Red Chinese might be using techniques of altering human behaviour which were not understood by the United States and which would have implications of national survival in the context of national security concerns at that time.

MK-Ultra and other secret Government experiments have helped encourage conspiracy theorists to the conclusion that government sponsored mind control programs continue in secret. Hence providing the opportunity of enterprising companies to market and sell devices like ‘The QuWave Defender’, which utilise ‘Scalar Waves’ and ‘Solfeggio Energies’ to protect ‘Affected Individuals’ from Electronic Harassment, EMF, Psychotronic, Spiritual and Psychic Attacks.

The QuWave advertising spiel includes the following list of harassments and then an interesting account of how the products ‘work’….

ARE YOU CONSTANTLY BEING:

The ‘Solfeggio’ QuWave products, generate up to three different frequencies:

These frequencies are assimilated by the brain via the “tuning-fork” principle to get your brain more in tune with the relaxation alpha meditation state. How does this product achieve results?

The Quitter generates two types of Solfeggio Frequencies. Basically, these waves act like a tuning fork to make your brain waves vibrate sympathetically with the frequencies produced by the Quitter. These frequencies make your brain more receptive to change and more able to fight some of the cravings you might have which could lead to addictions.