HOW IT WAS DISCOVERED

……A certain gentleman in Launceston, Tasmania, found himself one day under an obligation to a gentleman of that town, and offered to place him in possession of a secret which he long held. This secret, he declared, had enabled him for many years to cure his friends and acquaintances of long-standing diseases, and had kept him also in the best of health up to what was a ripe old age. Eventually the secret of a peculiar blend of certain herbs was revealed, and the medicine put to a severe practical test, which test, it may be stated, resulted in the most extraordinary success. From being the secret fad of this amiable old enthusiast Vitadatio gradually spread to becoming the popular remedy of a large number of people in Tasmania, until, at length, the demand becoming so great, business negotiations had to be entered upon for an enormous supply to satisfy the wants of its ever increasing number of friends. From Tasmania it spread to New Zealand, where it quickly became in such demand that a central depot for its distribution had to be established. 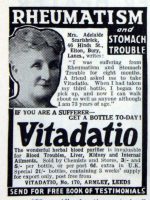 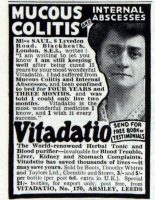 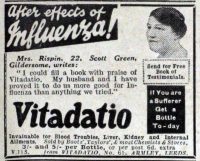 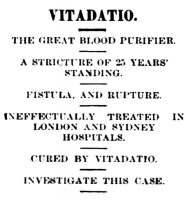 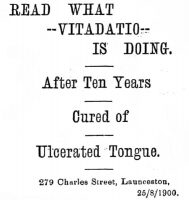 Its history in Australia is almost too new to need recapitulation here. From a modest start about three years ago it quickly caught the public taste, disease after disease was conquered by its peculiar properties, and it was evident from but six months workings that Vitadatio had come to stay. The public are doubtless well accustomed to hearing of cures being performed by some patent medicine after the medical faculty has despaired of success. But these cures appear chiefly in the advertisement columns of the daily newspapers, and it will but seldom bear the investigation which a little publicity and enquiry makes. Vitadatio, however, has this advantage in its financial and commercial arrangements, that almost everyone connected with it, from its energetic Australasian Distributor at its head, down through all the departments to the lowest office, all are able to testify what this wonderful medicine has done for them. Mr. Palmer who is the Sole Distributor for Australasia, will show incontestable proof that he has been cured by Vitadatio, and by nothing else from that scourge, known as Hydatids, and this after his case had been given up by all the medical men, whom he consulted, and after undergoing a painful operation which was quite ineffectual. But after a course of this medicine not only was he completely cured but he was accepted by a leading Life Insurance Company as a first class life at their ordinary rates. 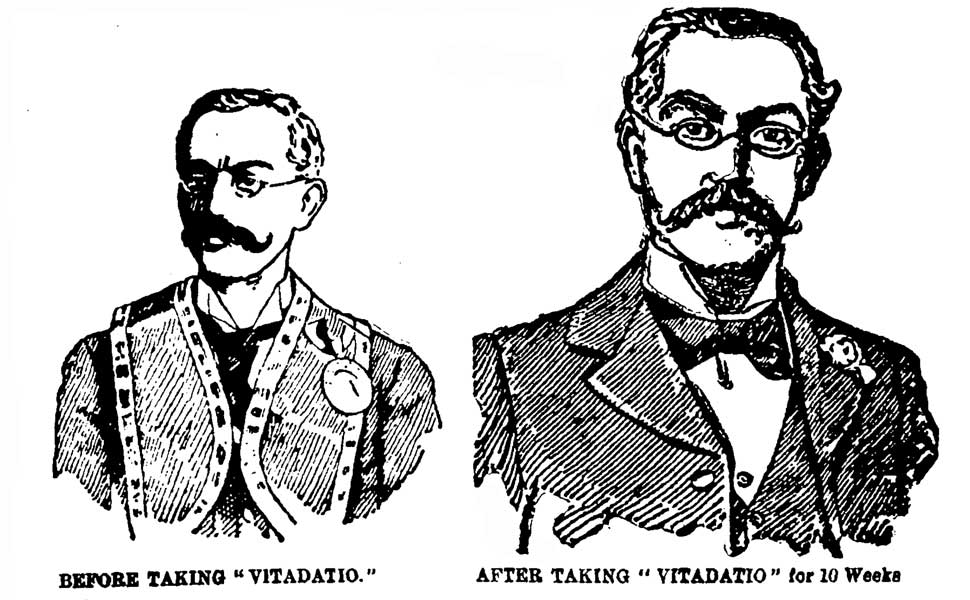 A similar story can be told by others employed by Mr. Palmer at his branch establishments for the distribution of this medicine, so that it is quite easy for the public to satisfy themselves that all the cures claimed can be substantiated. One peculiarity of Vitadatio is to be found in the fact that the various herbs of which it is composed grow in Tasmania only, as far as is yet known and are indeed peculiar to that healthy little island. It is perhaps in this fact that the reason may be found why Vitadatio has not been discovered before in this very old planet of ours, where, it is stated, there is nothing new under the sun. Tasmania is about as old as Sydney, that is about 100 years, since our settlers occupied it, so that it is not surprising that this remedy has only within the past few years been discovered. An advantage to our colonial population in purchasing this medicine lies in the fact that the manufacture and distribution of Vitadatio employs many hundreds of people in all parts of the colonies, and that the money spent by the public does not have to be sent to other places, but stays here. This, of course, is but a minor point in comparison with the far more important fact that no, matter what your disease may be Vitadatio has proved itself to be worth a trial. This is the main fact which justifies the confidence all people feel who have once given it a trial and far outweighs any other argument which may be used in its behalf. For further particulars, S. A. PALMER, 184 Pitt street, Sydney. Correspondence Invited. Write for Testimonials.

SYDNEY, Friday. Elliott Bros Ltd wholesale merchants, were proceeded against in the summons division of the Water Police Court today before Mr. Barnett, S. M. in regard to a medicine known as “Vitadatio,” which the information set out was falsely described, in contravention of the Pure Foods Act. Mr Robison appeared to prosecute on behalf of the Crown. Mr Windeyer appeared for the defendants.

In outlining the case for the prosecution Mr. Robison said that the Crown relied on a statement printed in a pamphlet sold with the medicine. The pamphlet set out that “Vitadatio” was a great herbal remedy for Bright’s disease, had cured Bright’s disease, hydatids, stricture, cancer, consumption, and ringworm, and would cure the most severe case of hydatids, tumorous growth, lung trouble, and heart trouble.

A certificate by Dr. Cooksey, Government analyst, was put in, stating that “Vitadatio” contained:

alcohol (by weight 1.1 per cent., equal to proof spirit 2.5 per cent ) salicylic acid (half a grain to the pint), tannin, and vegetable extractions, consisting of extract of gentian, sarsaparilla, and a small quantity of senna or rhubarb.

Dr. J. B. Cleland, principal Government microbiologist, said that the medicine in question was certainly not a cure for cancer, hydatids or ringworm and the alcohol in the preparation would be harmful to Bright’s disease. Neither would it cure consumption or tumorous growths. After further medical expert evidence had been given, Mr. Barnett asked Dr. A. A. Palmer, first Government medical officer, if the concoction known as “Vitadatio” would have any effect upon any disease with the exception of Bright’s disease

Mr Barnett: What would be the effect upon any person suffering from Bright’s disease?

Dr Palmer: It would not have any beneficial effect. It might even have a deleterious effect.

For the defence Sydney Arthur Palmer of Flinders lane, Melbourne, said he was proprietor of “Vitadatio,” and had been so since February 1914. Previous to that he had been agent for the mixture. He purchased “Vitadatio” from W. Webber of Tasmania. As far as witness knew the claims that the mixture had cured the diseases set out were true. He had known the recipe for 19 years, and the analysis put forward by the Government was not correct. Outside the spirit and salicylic acid, which were used as preservatives, there were only two ingredients. One was a herb which witness knew, and the other was one about which he did not know much, but which he purchased in Tasmania.

In 1934 the cure-all got an unfavourable mention in a New Zealand parliamentary debate. 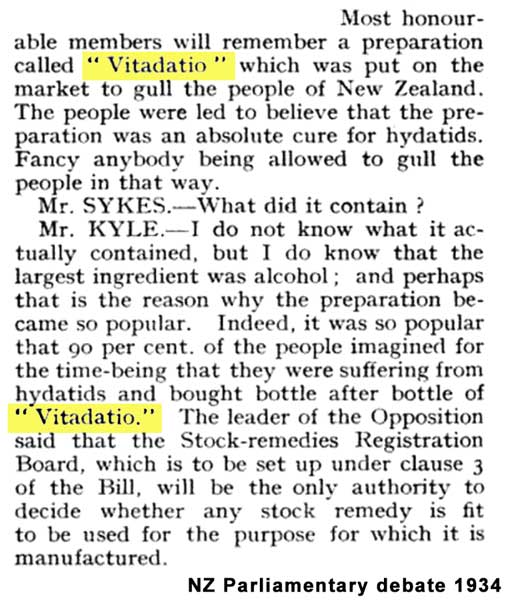 The recipe for Vitadatio is recorded in John Rowland Skemp’s book ‘Memories of Myrtle Bank’:

Boil 3 hours – not fast – then strain, bottle and cork tight. Take a wineglass after every meal.