In 2017, data from the Melbourne Sexual Health Clinic (which has operated continuously since it opened in 1918) shows Melbourne is facing a rapid increase in cases of the sexually transmitted diseases syphilis and gonorrhoea. 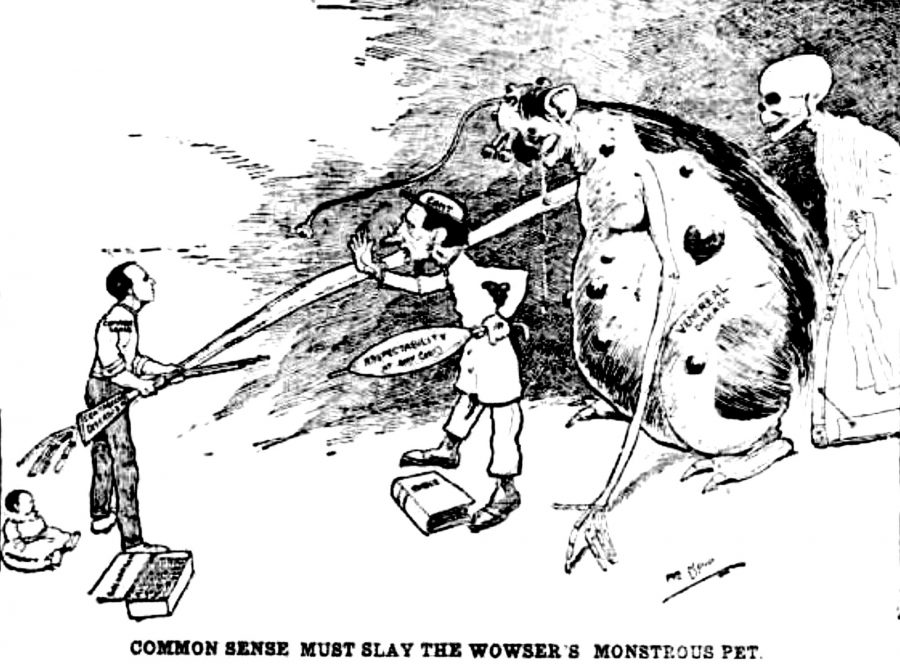 Syphilis is caused by the spirochete ”Treponema pallidum” and can lead, in its tertiary stage to what was called “general paralysis of the insane” in my psych. nurse training days in the mid 1970s. The condition’s telltale signs include grandiose delusions, a staggering gait, disturbed reflexes, asymmetrical pupils, tremulous voice, and muscular weakness. It is of great concern that with the resurgence of this disease there may be many young medical and nursing staff who have never seen the symptoms of syphilis in their lifetime and would be ill equiped to diagnose and provide effective early treatment.

In the 17th century, it was believed syphilitics could rid themselves of the disease by having intercourse with a healthy virgin. In their desperate attempts to understand the disease, 19th century physicians conducted experiments on animals, felons, prostitutes, servants and they even began injecting themselves and their students.

Another common remedy was mercury. This gave rise to the saying, “A night in the arms of Venus leads to a lifetime on Mercury.” 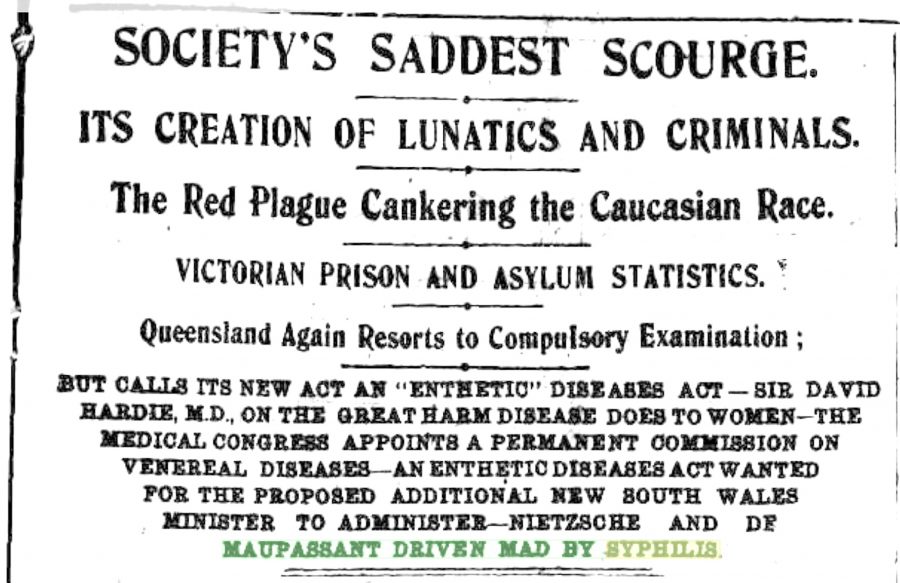 It wasn’t until 1943 that penicillin became the standard, successful treatment. Until then, suggested remedies were creative if not bizarre. Unsuspecting wives were fed mercury-laced chocolates by their infected husbands.

“Men were told to be sure after engaging in risky sex to wrap the endangered organ in a piece of cloth soaked in wine, shavings of guaiac (the wood of the guaiac tree was thought to penetrate areas of body mercury couldn’t reach), flakes of copper, precipitated mercury, gentian root, red coral, ash of ivory and burnt horn of deer  …elaborate shopping. If a chancre (ulcer) did appear, the ulcerated part was to be covered with a spider’s web and a band of violet fabric.”

(Pox: Genius, Madness and the Mysteries of Syphilis: Deborah Hayden) 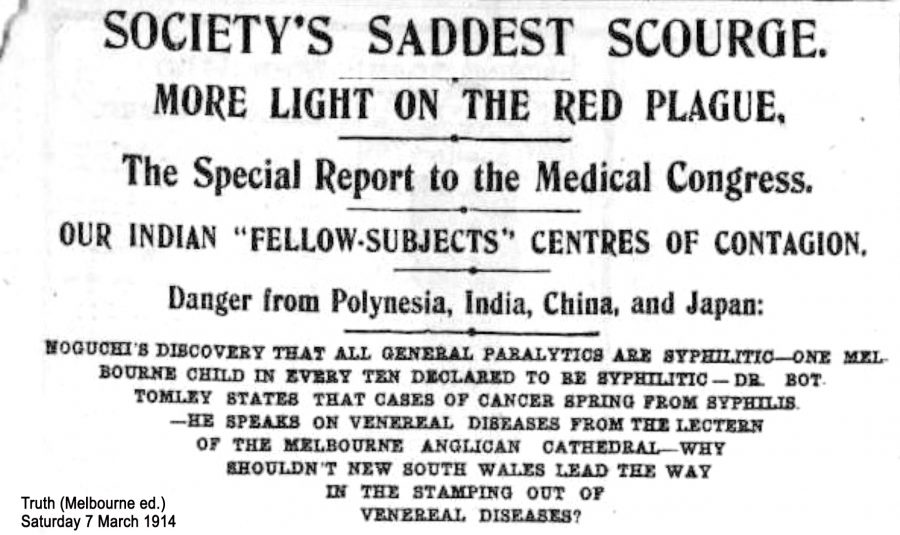 A report to Australia’s Federal Government cabinet in 1915 stated that syphilis was responsible for more disease, more incapacity and misery than any other single agent or cause. It estimated that up to 10% of the whole of the population of large cities in the Commonwealth were inflicted with syphilis and that every year about 500 children were treated for syphilis at the Children’s Hospital in Sydney. The committee found that the main cause of infant mortality in the majority of 9107 cases was hereditary syphilis. A member of the committee, Dr Cumpston (Federal Director of Quarantines), illustrated the awful danger of syphilis on account of its highly contagious nature, in the case of a young foreigner recently landed in Australia.

Syphilis in so bad a form that it was a danger to all near him was found on this man and the Commonwealth quarantine authorities took steps to prevent him leaving the vessel, and proclaimed him a prohibited immigrant. He escaped through a porthole, however, at the next port of call, and roamed about one of our cities for days. The police were put on his track, and he was followed across two States. Then he was found in one of the principal streets of a capital city, selling fruit from a barrow. During that one day on which he was captured he had handled hundreds of apples. Just what harm that one young foreigner did to the people of Australia would never be known Dr. Cumpston said. 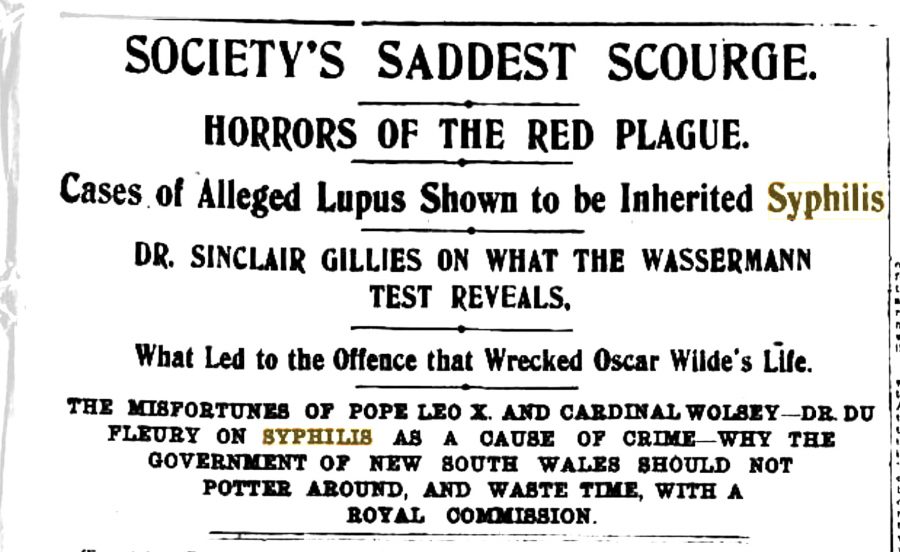 From about 1910 onwards, the clash of alarming mortality statistics, fear that Australian troops would not be fit for impending war /would return with high incidence of the disease and a the pervading puritanical religious climate led to shrill debate about reforming the Health Act and introduction of “compulsory” reporting and treatment of people with syphilis.

Here’s an example from a Truth newspaper editorial in 1911.

The antagonism of a small, sex -obsessed section of the community to any suggested reforms where sex is concerned must be expected. There are many peculiar phenomena in the pathology of sex, and any discussion on matters relating, even remotely, to the function of reproduction excites in these persons an erotic fury. They are seized with an ecstasy bearing a perilously close resemblance, according to gender, to satyriasis and nymphomania. Under the fantastic influence of their frenzied imaginations the proposed amendments to the Health Act conjures up mental vision of a gang of masked inquisitors dragging a shrieking virgin from the bosom of her family, and haling her through the streets to be examined publicly in a courthouse crowded with leering males. Delirious shapes haunt their waking hours, and in the still watches of the night the fevered colours of phantasy paint the pictures of a stealthy prowling assassin slipping an accusing missive under the door of the chief inquisitor. Moaning in their sleep they behold the shamed and sobbing damsel dragged from the court to a gloomy dungeon. In vain the weeping mother strives to arouse pity in the stony hearts of her brutal gaolers. She is doomed. Not for weary months, perhaps years will she again behold the light of day. No more her the sun shall shine until, a shrinking emaciated creature, she is thrust from the prison gates, stamped with the scarlet letter of shame. Alas! A few short years—an object of scorn and contemptuous pity—and she sinks into an untimely grave, a victim to the base injustice of her fellow-creatures. It never seems to strike any of the cackling crowd who champion the cause of the pure and modest maiden, that the amended act will apply to all, irrespective of age or sex.