It was my 63rd birthday recently. The following article appeared in Melbourne’s Argus newspaper on the day I was born, in 1952.

When do we see Television?

O you’ll have to be content with your radio set for a long time yet, because television has been pigeon-holed for the time being in Australia, says H. J. BROWN, Controller of Defence Research and in this article he tells why.

Many have been the prophecies and many the speculations as to when television will be seen in Australia. The question is inevitably asked whenever the word “television” is mentioned. What is the answer? Why the delay? What is happening, if anything? Will our radio sets soon be obsolete? Television was first demonstrated as a practical system in 1925 and reached commercial maturity just prior to World War II. Since the end of the war, Australians have watched the B.B.C. in England steadily perfecting and planning a complete network of stations covering .the United Kingdom. We have seen private enterprise in the U.S.A. build up a television industry whose gross takings in 1951 reached 2.25 billion dollars. Unfortunately, defence preparations are tending to put television into the background as a luxury which this nation can ill afford at this time. Its introduction at present would mean a drain on electronic manufacturing capacity which would undoubtedly conflict with growing service requirements. Soon after the end of the war, electronic industries in this country turned their attention to television and sent engineers and research workers overseas to gain experience so as to be ready for production.

Television sets on the average contain about 20 valves as against five or six in the average radio and cost about five times as much. The electronic industry, therefore, would have to produre about five times as many components for each television set as they do now for each radio set. This would throw a large burden on industries which are already finding it hard to keen up with demands. Television requires also men of greater skill and many more than radio for almost every aspect of design, engineering servicing, testing, installation. Manpower problems are difficult enough now without television. The Government has therefore been reluctant to embark on this new venture when every effort is being made to speed up defence preparedness. However there is a possibility that the Government may permit the erection of a purely experimental station at either Sydney or Melbourne and strictly limit development. While the 1948 Broadcast Act remains unaltered, the Government can use its monopoly to keep control of the extent of any such scheme and to keep it from interfering unduly with defence work. For this reason it seems most unlikely that any change will be made in the near future to this Act.

Meanwhile, for those who like to think about the impact television will have on our mode of living when It does come in full force, here are some interesting data collected from America. Last year 3,000 cinemas closed down and within a year it is estimated that between 6,000 and 7,000 will have had to close as a result of competition from television. Surveys have shown that 23.0% are reading newspapers less than before T.V., 48.5% are reading magazines less, and 58.9% are reading books less, 80.9% are going to movies less, and 92.4% are listening to radio less. Inevitably we shall find, if our civilisation continues to exist, that our society, our homes, our sport, our culture, in fact our whole lives will be revolutionised in time by this prodigy of modern science, television. 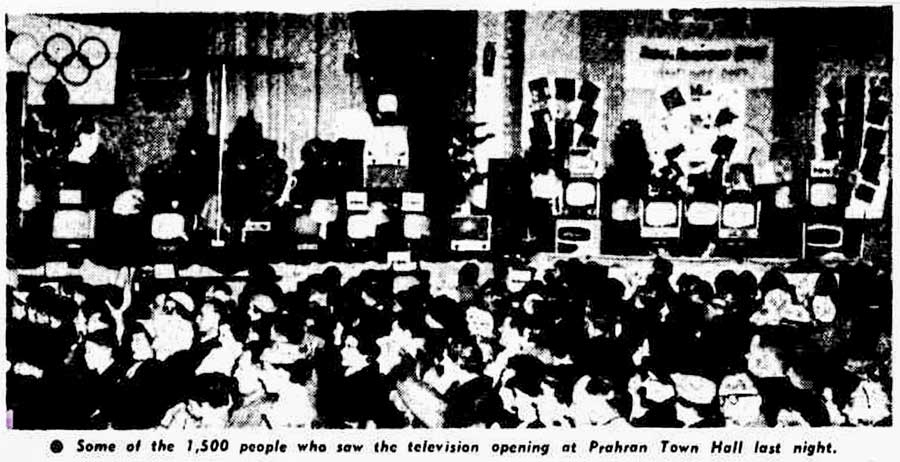 A correspondent who was at the ‘Prahran Opening’ summed up the experience….

In spite of a few “shaky” moments – and the set I used for viewing certainly SHOOK – there could he no doubt that this was a mighty entertainment medium that had come to stay. One thing was made clear to me in my mixed bag of viewing that stage shows adapt themselves splendidly to the medium, as was the case with the scenes from the “Olympic Follies,” transmitted from the Tivoli Theatre. This really captured the atmosphere of the show. And I liked Eric Pearce as a compere. His easy-mannered, genial personality came right through the viewing screening the quiz show, “I’ve Got a Secret.” The quiz itself had some dull spots but livened up considerably when attractive Jean Moorhead (Miss Hollywood of 1956) arrived in the show with her “grim” secret – woollen underwear for Melbourne’s climate.

Another feature was photogenic Mary Parker’s interesting manner of handling the weather report. She sketched it out for listeners on maps of Australia and Victoria, gave the forecast intelligently and brightly and made a rather dull affair (for Melbourne anyhow) quite entertaining.

Eric Pearce’s reading of the news was illustrated with appropriate newsreel shots. One of these was really “hot”, showing the smashed up car in yesterday’s level crossing crash at Frankston.

Preparations for the Olympic Games were well covered by the news cameras and there was a comprehensive whip around of fairly current overseas news by camera.

“Our Miss Brookes,” an American comedy series, with Eve Arden, promised a lot of amusement in the first of the series aired last night.  The first episode of outdoor adventure drama, “Robin Hood,” wasn’t quite as encouraging. By comparison it suggested that interior comedy shows are the “best bet.”

My first impression of television was through the windows of a forgotten retailer’s window where crowds would gather to witness first hand the ‘glowing demon’. TV was finally introduced in Melbourne when I was 4 years old and it was probably a couple of years later still before we actually owned one. The childish delights of shows like Disneyland, the Mickey Mouse Club and Robin Hood were tempered by the compulsory viewing of the Perry Como show after Disneyland on a Sunday evening …cunningly ensuring an early bed time for us kids.

Just as in America, TV will capture the attention of the entire family,” he said. “You’ll find many families eating their meals in front of the home television set. Children and adults won’t want to go to bed at their usual time. Kiddies watching exciting serials just won’t be able to sleep for hours afterwards. Most homes will turn a living room into the family television room, with special window blinds and furniture grouped around the TV set. 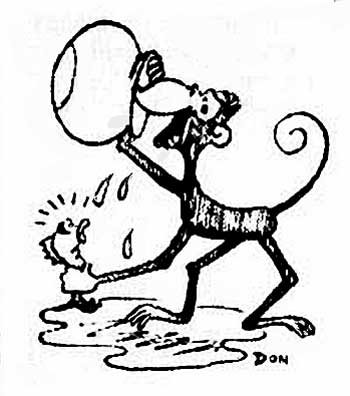 Television caused a riot among 40 monkeys in a North London pet shop last night. Three monkeys from the shop appeared on band leader Billy Cotton’s B.B.C. television programme. The pet shop manager thinks they were so excited by their experience they could not settle down again, and started a riot among the rest of the animals in the shop. First one cage full of 10 monkeys escaped. They went around the shop and released all the rest.Then together they released birds from their cages, shook bird seed all over the shop and drank the water in the goldfish bowls and ate the fish.